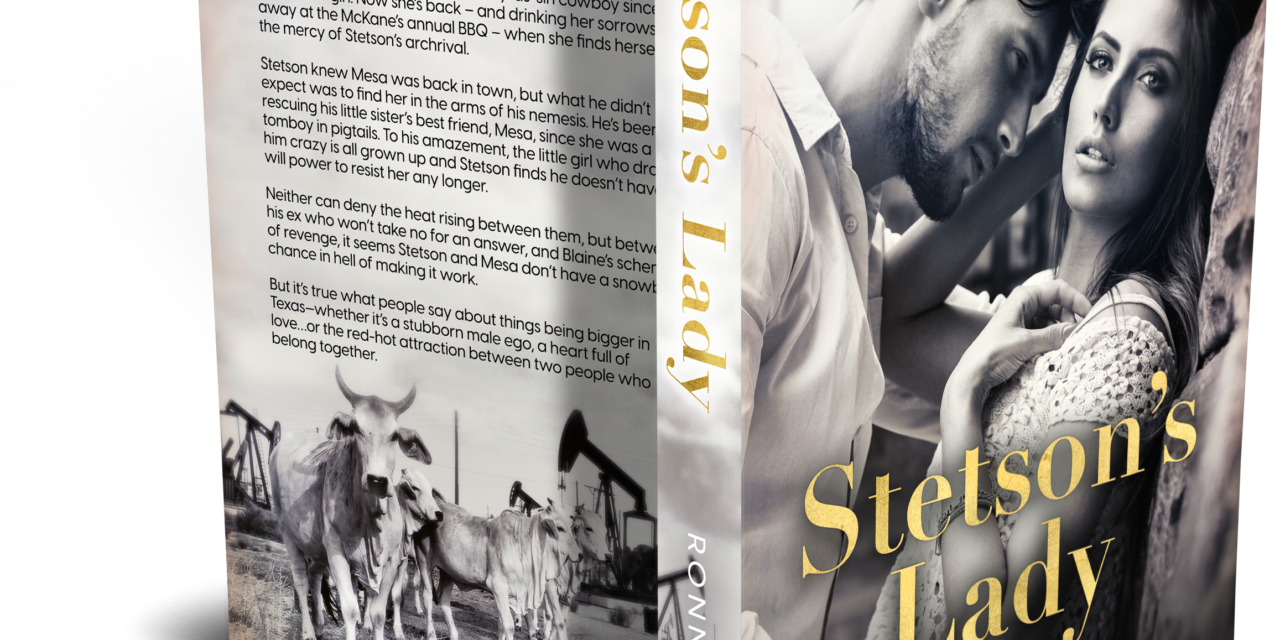 No one knows Texas and oil better than Ronni Griffith, a native Texan and an oilman’s wife. She has produced a hot new book you will not want to miss.

He’s a man who has it all—but the lady he truly loves.

Mesa Stone left Maple Ridge to get away from her best friend’s overbearing, headstrong brother, Stetson McKane. She’s been head-over-heels in love with the sexy-as-sin cowboy since she was a little girl. Now she’s back – and drinking her sorrows away at the McKane’s annual BBQ – when she finds herself at the mercy of Stetson’s archrival.

Stetson knew Mesa was back in town, but what he didn’t expect was to find her in the arms of his nemesis. He’s been rescuing his little sister’s best friend, Mesa, since she was a tomboy in pigtails. To his amazement, the little girl who drove him crazy is all grown up and Stetson finds he doesn’t have the will power to resist her any longer.

Neither can deny the heat rising between them, but between his ex who won’t take no for an answer, and Blaine’s schemes of revenge, it seems Stetson and Mesa don’t have a snowball’s chance in hell of making it work.

But it’s true what people say about things being bigger in Texas—whether it’s a stubborn male ego, a heart full of love…or the red-hot attraction between two people who belong together. 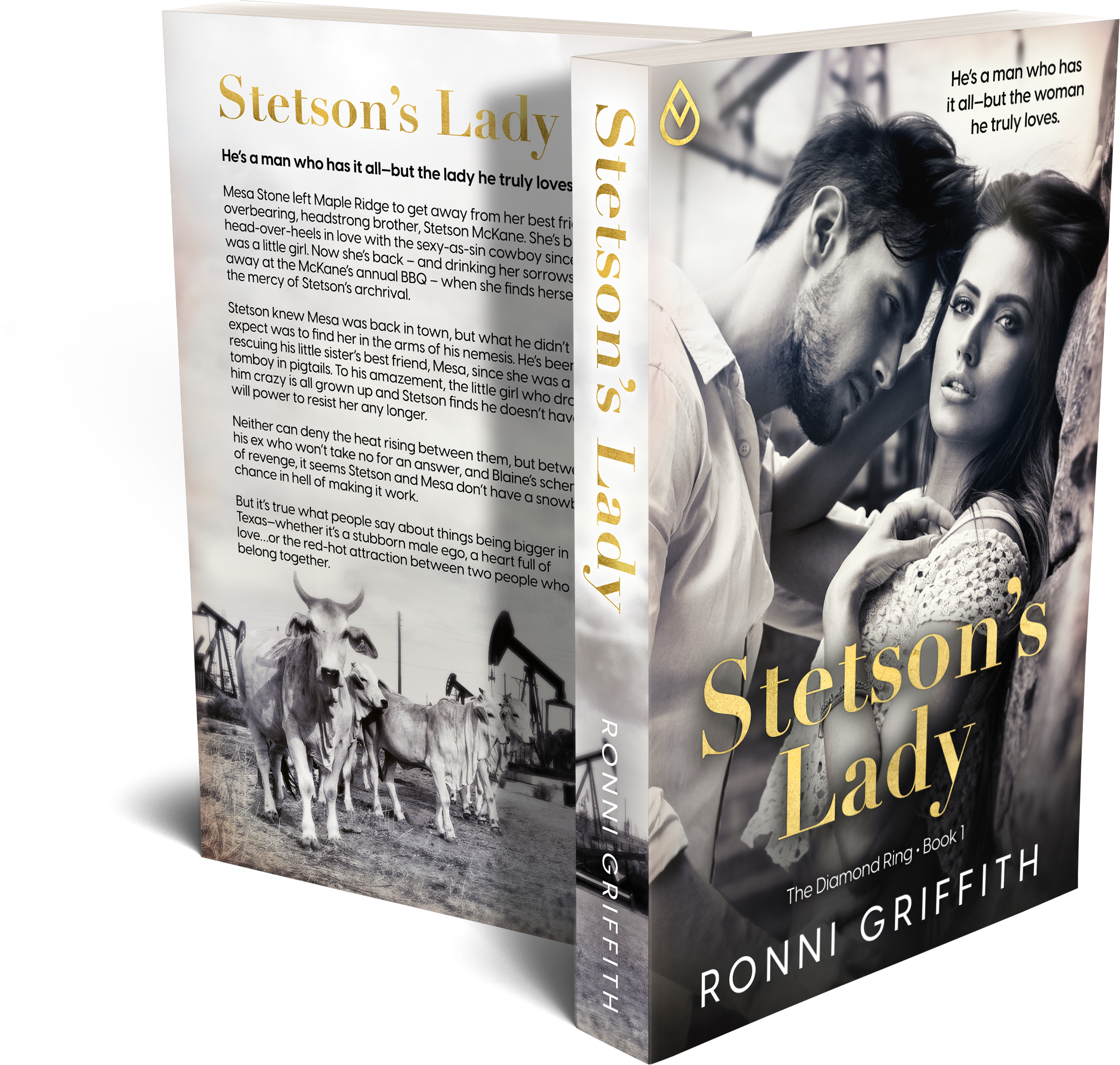 As she pulled her truck onto the gravel road, Mesa’s stomach twisted in knots at the thought of seeing the McKane family again and one McKane specifically.

The last time she’d been on the Diamond Ring Ranch she’d left crushed, tears streaming down her face as she pulled away from the barn she was about to go into. Now, here she was, four years later, fixing to go to a party in the same place her heart had been ripped from her chest.

Good thing she’d looked in the rearview mirror before getting out of the truck. Between lipstick on her teeth from chewing on her lips while she drove and her mussed auburn hair, she looked like a hot mess. After putting herself together, she took a deep breath and stepped out of her pickup. She scanned the vehicles for one in particular. Stetson’s.

Placing her hands on her stomach, trying to calm the butterflies that had taken up residence there, she kept telling herself she could do this. She’d been invited to this party just like everyone else, which gave her every right to be here. She and Laci Jo were best friends, after all.

Before Mesa could even make it through the barn door, Laci Jo came out. “It’s about time. I was starting to think you weren’t gonna show.”

“Well, hello to you too. To be honest, I almost left when I saw the number of vehicles out front. Did y’all invite the whole county?”

“Oh, come on, Mesa. It’s no different from any of our other annual bar-b-ques we’ve had. You probably know the majority of the people here.”

“I guess we’ll see. It’s been one of those days and I could really use a beer.” Mesa linked her arm through Laci’s as they walked through the big double doors.

The inside heaved with people visiting at long folding tables or dancing on the sawdust-covered dance floor to the Cotton-Eyed Joe.

Mesa couldn’t help but smile, walking through the all-too-familiar barn. The music, people, the smell of hay, leather, and horses—it all gave her a sense of coming home.

They stood in line at one of the coolers waiting to get their beers, and Mesa asked the question she’d been wanting to since she’d pulled up. “Um, so, Stetson and Kacey wouldn’t be here, would they?”

Laci reached into the cooler and eased out two beers. “Does it matter?”

“If you recall correctly, the last time I was here wasn’t one of my greatest moments. I’m not really in the mood to have a run-in with Kacey tonight.” Mesa scanned the barn again. She’d been through a lot this past year, and for one night, she wanted to have a good time.

“No, Stetson went to look at some Brahman cattle, up near Houston, that he’s wanting to buy. If he comes back to the ranch tonight, it’ll probably be late. So relax, kick up your boot heels, and have fun, girl. You deserve it.” Laci Jo gave her a comforting welcome-home hug.

“Okay.” They raised their beers in a toast. “Here’s to a good time with great friends.”

Ronni Griffith is a lifelong Native of Texas, an oilfield man’s wife of 26 years, mother to 3 amazing kids, and a “Honey” to 3 wonderful grands. She started her writing journey when her husband and niece convinced her to sit down and write the characters story that had taken up residence in her head. It’s been a learning experience from the beginning, but one she’ll cherish forever. When Ronni isn’t writing, you can find her riding on the back of her man’s Harley, watching football with her family, hanging out with her feathered friends in their coop and eating wings at her favorite wing bar.

Who doesn’t love a SEAL?