Desiree's Place > General > WET HEAT means many tings when it involves a SEAL! 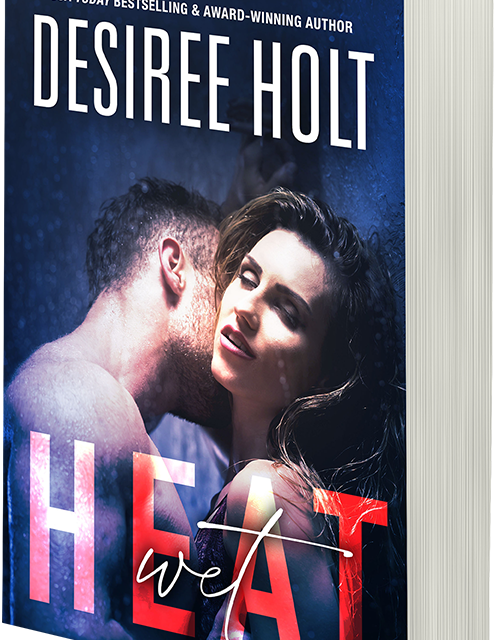 Put two stubborn people in close quarters—a hot SEAL and an appealing author, add in moonlit nights by the lake, and suddenly they don’t mind sharing. But then reality intrudes, Dix returns to lead a repeat of the mission and all Peyton can do is pray it will be successful and that when he returns, he’ll come back to her.

GET IT ONLY AT BOOKS BY DESIREE

And check out the other deals in Books by Desiree

He rounded a curve in the dirt road just as his GPS announced, “Your destination is on the left.” The outside of the place was exactly as he’d seen it in the photo online. The boat Eileen had told him about was already tied up at the little, short dock. The soft breeze drifting in through his open window carried the fresh scents and sounds of the area, instantly soothing him. 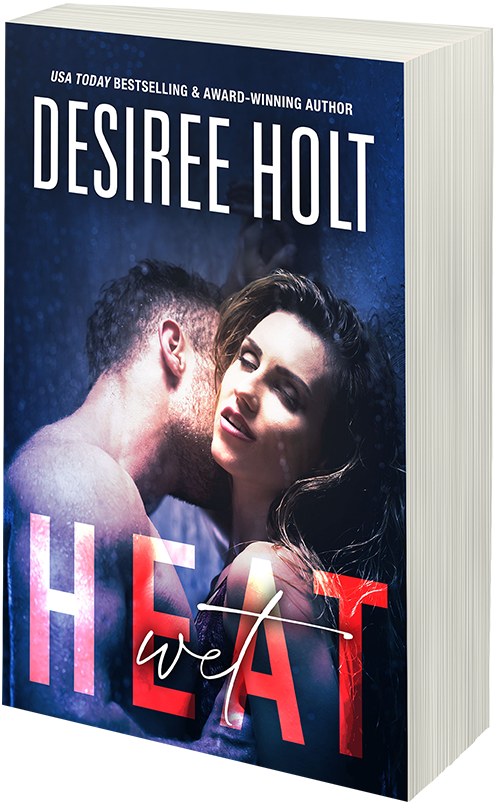 What was jarring was the car parked on the so-called grass next to the cottage. What the fuck? He hoped it wasn’t a nosy neighbor just waiting to give him an eager welcome. Socializing wasn’t on his to-do list. He pulled in next to the vehicle and grumpily opened the door and got out. He was just looking around to see where the owner of the car might be when the side door opened and a woman popped out.

Okay, maybe woman was too mild a term. She looked like a miniature lush goddess. If he’d been the least bit interested in female companionship, he’d think maybe his day was looking up. This one couldn’t be more than five foot five, with hair in a rich shade of red framing a heart-shaped face. Her hair bounced around her head in wild curls, in time, he noticed with her breasts that bounced beneath her T-shirt. The strap of a cross-body purse lay in the valley between those breasts, emphasizing their roundness. Shorts accentuated nicely rounded hips, and when she turned to pull the door shut tightly behind her, he got a view of an ass his hands itched to cup.

Whoa there, mister. This is a no-sex time out. Reconditioning, not relaxation. Maybe he should tell that to his cock that suddenly wanted to make its own appearance and deliver a greeting. It was sending him a very painful message which took all his famous discipline to control.

“Are you the housekeeper?” He didn’t even know if Eileen had told him there’d be one, but who else would be here, and with a key?

He took a moment to note that her face was free of makeup, and he doubted it needed any to enhance it. Emerald-green eyes peered out from beneath lashes thicker than any manufacturer could produce. Her cheeks held a faint rosy tinge and a smattering of freckles. And that mouth—

Yup. Good thing he was on a no-sex diet. He had one goal to accomplish here, and he couldn’t afford to be distracted.

A little bubble of anger tried to work its way up through his system. He did not need this. He wanted to get settled in, go for a run, take a swim, and contemplate his future.

“I’m sorry. You must have gotten the address wrong.” He stepped forward, figuring if he crowded her space, she’d retreat. She was nearly a foot shorter than he was.

“Address wrong?” she repeated. Then she held up the ring with two keys on it, jingling it in front of him. “Then exactly how would I have these keys?”

She stared at him for a long moment then shocked him by breaking into laughter.

“Does that work for you often?” she asked, grinning. “I mean, that whole alpha thing? Get out? Be gone?” She burst into laughter again.

Dix ground his teeth together. What the hell was going on here?

“We have to get this straightened out. Right now.”

“Fine by me.” The woman tugged a cell phone out of her pocket and scrolled through the numbers.

Dix held his own cell up. “I’ll call the rental agent myself,” he told her.

She frowned. “You don’t trust me?”

“There’s obviously some mix-up, and I want to hear the answer for myself. We’ll get the agent to settle it, and then you can just pack up and get out of here.”

“Fine. Then you can just get in your truck and head on out of here.”