Last day to enter to win the Protecting series!!!! 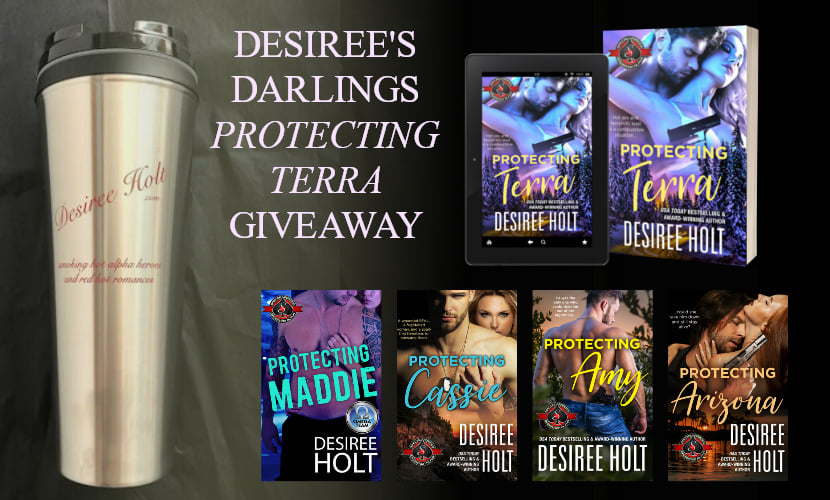 Last chance to enter to win print copies of Protecting books 1-4 plus a silver Desiree thermos.

What’s it all about? Let me tell you.

One of the things women like best about military men, bot current and former, is they’re natural born protectors. As such, they became the natural heroes for my Protecting series, the safety net for women in danger. Each branch of he military has iuts own motto but thye all mean the same thing: Serve and Protect. As such they became the basis for a series about men who stepped into their natural roles as protectors, even when the heroine is strong in her own right. Because even a strong woman needs help nce n a while, right? It strated when Susan Stoke invited me to write in her Special Forces World and it’s just grown since then.

When Maddie Winslow talked a student out of his gun in her classroom, she never figured it would set off a chain of events that put her life in grave danger, and the lives of her parents. Hiding in WitSec for thirty years, her parents thought they had beaten the odds—until the image of Maddie, an identical replica of her mother—hits the television airwaves and the people who have been seeking revenge all these years find her. Intent on learning where her mother is hiding, they break into her home and then try to kidnap her. Frightened, she goes to her friend, Zee, who once dated someone in Delta Force. She calls him to explain her friend’s situation, but he’s prepping for a mission and can’t leave the base.Hunter “Hawkeye” St. John, a Delta Force team member, is on medical leave recuperating in Tampa and chafing for some action. When the he and Maddie meet, the sparks flying between them sizzle the air. But if Hawkeye wants to move forward with Maddie he first has to keep her safe and then eliminate the bad guys.

Injured and discharged, he is lost…
Sam Alvarez is newly discharged from SEALs that had been his entire life. Without the Team he is lost, but a bad injury to his left arm ended his career. His rehab is slow and he resents everything. The tiny isolated cabin in Maine former SEAL John “Tex” Keenan found for him is just what he wants.
Frightened and in hiding…Physical therapist Cassie Malone had a job she loved, great friends and a man in her life she thought was Prince Charming. Until by accident she discovered he’s one of Boston’s drug kingpins. Now she’s hiding out in tiny Castile and scared he’ll find her.  When Fate throws Cassie and Sam together, it’s a battle for him to let her help him relearn everything. His surliness is in high gear and she’s always looking over her shoulder. But neither of them counted on or expected the hot, hot attraction blazing between them. When drug smugglers show up and put everyone in danger, including Cassie, it’s up to Sam to use his skills to take them down and save the woman he’s come to love. But can he do it before it’s too late?

She thought her past was firmly behind her…
Amy Ressler was a vivacious, outgoing person, looking forward to her first job after graduating college. Until the night her stepbrother slaughtered her entire family, and thought she was dead, too. For ten years she’d been living under an assumed name in a house in Tampa with security guards and a security system. Her agoraphobia keeps her a prisoner in the house where she designs sought after video games.  Quinn Molloy couldn’t seem to find a place for himself when he left the SEALS He has been part of the teams for eighteen years and suddenly an injury left him with no place to go, except to visit his friends Melody and Tex Keenan. Where they introduce him online to KitCat, Amy in her online disguise, a terrified woman who needs a bodyguard.
The killer is loose…
When Matthew Baker escapes from jail the hunt is on, led by the US Marshals. But with Amy helpless in her self-imposed prison, Quinn accepts the job as her personal bodyguard, and they discover that what starts online can explode n the bedroom. As long as he can keep her alive.

She wasn’t a no-name sex kind of woman but stress had gotten the better of her…
She’d never see him again so she could indulge every need and desire she had with this hot, sexy, intense, troubled man. Now she has to put it out of her mind as the DEA task force she’s on prepares to take down dangerous drug kingpin Luca Vasquez, coincidentally her brother-in-law. When her sister is murdered and her niece disappears, she leaves the task force to find her.
He couldn’t get the memories of the woman out of his mind…
Being a SEAL was the only thing Clint “Razor” DaCosta had known for twenty years, until a disastrous mission ended his career. Now dreams of the raw sex with the passionate redhead are the only things that keep the nightmares of that mission at bay. He’s still trying to figure out what to do with the rest of his life when a phone call from a friend brings him to a shocking meeting.
Passion…danger…murder…a lethal combination
No one is more shocked than Razor and Arizona when he answers her call for help. The heat is still there and it’s hard to put aside the memories of their scorching sex. But first they must find her niece and avenge her sister’s murder. And hope they both don’t get killed in the takedown.