Desiree's Place > General > In her darkest hour, only a ruined hero can help her

I was always told that if you want to write a good story, write what you know, either through narrative or personal experience. I do  that with almost all of my books. In fact, in MOVING TARGET, Book #1 in Guardian Security, Windswept was based on the small Texas town where I was living at the time and Quinn’s house is my house.

In FINDING REDEMPTION. I chose to base the main character on a real person. Many of you have met my son, Steven Horwitz at various conventions and book signings. Steven had a long-time friend who passed away suddenly a few years ago, but he was a great character and a terrific friend. He followed his own path. he would disappear for months at a time and people would say, “Bill? Oh, you know, he’s off doing something for the CIA. Or the NSA. Or the FBI. Or whatever. Then he’d reappear with no explanation.

But as a friend there was no equal. His passing left a big hole in a lot of people’s lives. And people kept telling me, “Bill’s someone you should write a book about.” So I did! He became the model for Ethan Caine, the dark hero of FINDING REDEMPTION. And if you want a dark hero to take home for Christmas (and why not, right?), Ethan fits the bill.

Here for your enjoyment, the first of two excerpts from the book, #5 in Guardian Security. 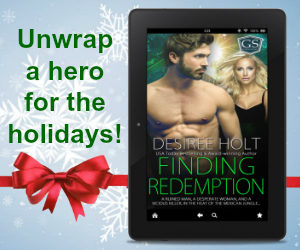 Lisa Mallory’s marriage from hell ended with her husband’s unsolved murder. Four years later, her eight-year-old son, Jamie, is kidnapped. When every other avenue of finding him fails, she turns to her brother’s best friend. He’s not the man she’d have chosen, but to get her son back, she’ll suffer anything…even the desire he stirs that she’d thought long dead.

Ethan Caine, former Marine/special ops agent, is dealing with his own private hell. All he wants is to be left alone with a bottle of whiskey to drown the guilt of surviving a mission gone wrong. When he finally agrees to go after Jamie, he certainly doesn’t want the boy’s mother slowing him down. Besides, she makes him ache to have her naked and beneath him. Worse, she stirs dreams of the future…something he doesn’t deserve.

Passion explodes between Ethan and Lisa in the exotic Quintana Roo jungle, even as the past and present threaten to steal it all.

Of course it was raining. How fitting that the weather should be miserable.

Lisa Taylor Mallory shifted on the folding chair provided by the cemetery, careful not to move out from under the umbrella held by the funeral home attendant. Next to her, four-year-old Jamie snuggled closer to her, needing the assurance of his mother’s warmth.

Under his own umbrella, Pastor Howard Devol of Mangrove Baptist Church intoned passages from the Bible. He had already eulogized Charles Mallory to the point of sainthood. Lisa clenched her fists and swallowed the nausea that insisted on rising at the back of her throat as she listened to the words.

If you only knew. Just let this be over. Please, please, let us get this over with.

She let her gaze travel over the crowd of mourners. The abundance of black umbrellas nearly formed a canopy over the assemblage. Tampa society’s A List as well as the giants of the financial world were gathered in their best funeral attire to mourn a man whose sins had been swept away in fire at the foot of a mountain.

“Keeping up the myth,” Josh Taylor had told his sister.

This is for Jamie.

He was so frightened by the circus surrounding the death of his father. Lisa wanted him to have closure on what had become an outrageous situation. Despite the devil’s trap her marriage had become, Charles Mallory had always been good to his son. So much so that Lisa had lived in constant fear Charles would one day disappear with him and leave her behind.

Sitting on her other side, Josh squeezed her arm, a signal that this farce would soon be over and everything would be okay. Not exactly the word she’d have chosen to describe the current state of her life. She clenched one gloved hand in her lap. No, okay wasn’t even in the ball park.

At last, the interminable ceremony ended. Josh rose and nudged her to stand with Jamie. The pastor signaled her to come forward. With her brother’s arm supporting her, she stepped over to the casket and took the white rose the pastor held out. She stared at the casket for a long moment, then dropped the rose on its mahogany surface.

In a voice so low only her brother heard it, she said, “Rot in hell, you son of a bitch.”