Desiree's Place > General > For a limited time, just 99 cents! Get it now!

Okay, readers, Hot Deal of the week. LINE OF SCRIMMAGE, Book #2 in my Game On series, is ON SALE for a limited time for just 99 cents. That’s right. The book RT Book Reviews gave 4.5 stars to and Guilty Pleasures called Purest Delight, is on sale for only 99 cents. Even if you ain’t into football, you will love Jake and Erin. I promise. Below is where you will find all the links.

And here is a sample of my favorite chapter

It was a typical night in central Texas, the air just a little brisk, the stars like crystal in a black velvet sky. Every seat in the stands at Granite Falls High School was filled, and the sidelines were jammed with people with VIP tags hanging around their necks. The local San Antonio television channels had sent reporters and cameramen to cover this as did the major networks. Jake Russell was a big name in football, more so because the story of his injury and subsequent retirement had fed the media all week since the announcement was made. 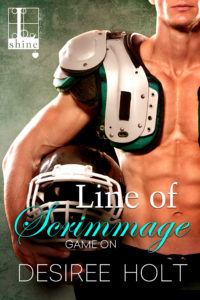 Jake stood on the sidelines with Joe Reilly and Coach Fenelli, Erin close to his side. Joe had done the majority of the interview earlier in the high school, his cameraman capturing footage of the trophies in the showcases and the banners on the walls. Joe had talked to Fenelli and some of the other players from that team who were here for the big night. They, too, had VIP passes and were excited for this event.

Jake grinned to himself. Tonight the Coyotes were retiring his number, and apparently, even though he was now out of the game, it was still a big deal to everyone. He looked around at all the people who were here to meet him, and Erin’s words, her mantra that she repeated daily, flooded his brain.

“You are so important to these people,” she’d told him over and over. “Jake Russell, the person. That’s who they want to know and who they admire.”

He was even beginning to believe it, although it had been a long hard row to hoe.

The week had been productive in many other ways. He told Erin he wanted to put the money he’d earned to work doing something important, and she’d been on board with that. They kicked around a lot of ideas and came up with two. One was to set up a permanent trust for Good Shepard House and the other was to set up a foundation that would entertain grants for shelters and programs for abused women and children. Erin was going to be the foundation director and Jake would spend a lot of his time lecturing on the subject of domestic violence and helping communities form groups and programs to deal with it.

Ivy had taken on the pro bono job of developing a public relations plan for the foundation, which would be named for their mother, and she was already tossing ideas at him.

Everything had been taken care of except the one thing that to him was the most important. Tonight he planned to take care of that.

Now they were waiting for everything to begin. Jake had requested they have the ceremony before the game in order to not take anything away from the players at halftime. Everyone had agreed, and now he was just waiting for the signal to start. The players, the fans, everyone else was excited about the ceremony. Jake was, too, but he had something else planned, something that was even more important to him. He slid his hand into his jacket pocket to make sure what he needed was still there.

Now they needed the band to stop playing. But when they did, they did not march off the field the way they usually did. They played the Granite Falls fight song, and when they finished their marching formation, he saw that on the field they spelled out Jake and his high school number, thirty-one.

“Ohmigod, Jake.” Erin was jumping up and down. “I hope Ivy is getting all this on camera because I’m too excited to take pictures.

Joe nudged his arm. “We’re ready.” He had his own camera crew standing by.

Jake walked out to midfield with Coach Fenelli, Principal Andrew Reinsdorf, and the team co-captains.

“Good evening,” everyone shouted back.

“You all know why we’re here today, to honor one of the finest young men ever to come out of Granite Falls High School. Jake Russell!” 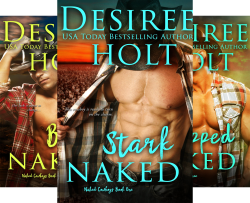 The Naked Cowboys are finally back!