Part of the Wilder Irish series

Read the blog, then go to my Facebook page to enter the contest for a free ARC of May Flowers.

She’s tied up at work…by her boss.

The last thing Lochlan wanted in a new assistant was some inexperienced, gorgeous, submissive blonde. However, a promise to a friend ensures that’s exactly what he’s stuck with.

May knows she’s out of her league, not only in her new job, but with her boss. He makes her want things she’s never considered—kinky, sensual, wicked things. 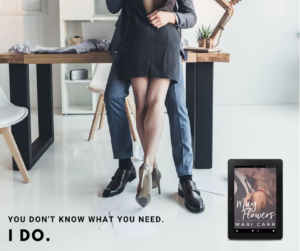 When trouble at home shows Lochlan more about her life than she wants him to see, there’s no stopping the sexy protector suddenly determined to claim not only her body, but her heart as well.

Lochlan was next to her in an instant, his hand on her upper arm, turning her toward him as he pushed her against the door. “If you say the words I’m fineto me one more time, I’m going to turn you over my knee and spank your ass.”

May was shocked into silence for a full thirty seconds before she could form a single word. “What?”

“You heard me. Tell me you’re fine one more time, and you’re going to find that skirt of yours wrapped around your waist, your panties on the floor, and your body draped over my lap. You got it?”

That was probably the hottest fucking thing anyone had ever said to her in her life. More than that, it confirmed that she wasn’t the only one suffering from a bad case of kinky fantasies. Lochlan wanted the same things.

Was that what had prompted her unexpected response to him? Was there something unspoken in the way he acted around her that made her want to check all her troubles at the door and disappear into him for a night…or twenty? Had his darker desires somehow kick-started these lustful dreams in her?

For the first time since dinner, his lips curled up into a grin. “Is that a good wow or are you contemplating calling 911?”

He shook his head. “I’d never hurt you, May. Never make you do anything you didn’t want. You say no and it’s no. No questions asked.”

Lochlan cupped her cheek once more. This time she turned her face toward the sweet touch, soaking it up. “I know you are, sweetheart.”

She knew what she needed. Turned out it was the exact same thing she wanted.

May took a deep breath and prayed she wasn’t making the biggest mistake of her life.