WITHIN A CAPTAIN’S SOUL by Lisa A. Olech is the 5th and final book in the Captains of the Scarlet Night Series.

Stormy seas, a captive heart, and a coupling that breaks all the rules . . .

After years of committed service, Captain William “Bump” Quinn has finally taken the helm of the pirate ship Scarlet Night. But when rough waters send the Night off course, William winds up shipwrecked and alone on enemy shores—and prisoner to China’s most powerful pirate queen. 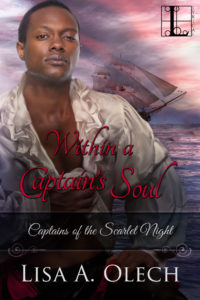 Captain Jian Jun is as alluring as she is formidable, and she’s careful not to let anyone too close. But the silence of the handsome Jamaican pirate in her custody intrigues her. Tempted by his topaz eyes and the strength of his character, she allows the captive into her inner sanctum. Though their bond defies all convention, Jun finds she is powerless against the emotions Will stirs in her. She prays their first union will not be her last. But with danger lurking in unexpected places, her beloved pirate may soon get the chance to prove he is every inch the hero he seems in her arms . . .

William Quinn hated the dark. His companion had taken the lantern when she left. He could still smell the spiced honey of her skin and the musk of their sex in the rumpled sheets. She’d been a tiger in bed. His flesh still burned where her nails had raked his back. He’d lost himself for an hour or two between her smooth dark thighs. He only wished he’d learned her name.

Will lay in the bed and closed his eyes to the darkness. It was easier to visualize the layout of the room from memory this way. The door was to starboard. A three-drawer chest sat a foot to port. His pants were another matter. Where had she tossed them? She’d been in a terrible hurry to put her mouth on him. When she’d stripped him and seen his engorged cock, a smile spread across her shining face as if she’d discovered some long lost treasure. After that, she was driven by a single-minded desire. She’d been a most eager partner.

He rose and found his pants along with the wide blood-red sash he wore about his waist. And one boot. All the while, his limited sense was still on high alert. In this darkness, it would be easy to hide and ambush him. It wasn’t as if he’d hear anyone approaching, but having lost his hearing at such a young age, over his lifetime, he’d honed his other senses to razor sharp. Will lifted his nose and gave another sniff. No, he was alone.

The heat along this stretch of the world limited his choice of clothing. Bare chested, he slipped into a tooled leather vest. He patted the breast pocket. His lusty partner wasn’t interested in his winnings from tonight’s poker tables. As the daughter of one of the local pepper merchants, money was not what she longed for. Madagascar pepper was considered black gold along this great treasure route. Her father was one of the wealthiest men in the city.

Will found his other boot, and sat on the edge of the bed to slip them on his feet. He sat there for a long moment. The hollow beating of his heart echoed in his chest. Even after hours of pleasure, the only thing sated was his body.

Sex with the silent man.

It wasn’t as if he could brag about his conquests. Tell tales of your night in his bed. He wouldn’t bore you with long stories, or shout demands. He was deaf and never learned the basic fundamentals of speech. For some reason that made women eager to spread their legs for him. At least for one meaningless night.

Making his way to the door, Will wasn’t surprised to find the public rooms below still doing a brisk business. Time held no meaning to these establishments. Glancing toward the back corner, the poker game still wore on. He was tempted to add to his already bulging purse. Tonight’s profits had come too easy, but then it had always been a talent of his to read faces. Call it a lucrative byproduct of being deaf. Whether bluffing at cards or dealing with his crew, he could spot a liar at fifty yards.

Will’s long legs carried him quickly through the dangerous dark streets. At more than six and a half feet tall, he made an imposing figure. The three-pistol baldric and side cutlass helped. As did his permanent scowl. He pulled a short knife from a leather sheath and carried it at his side. For two reasons. A handy weapon was never a bad idea, and the high polish on the blade gave him the perfect view of anyone trying to approach him from behind.

Will reached the docks without incident and was finally able to breathe easy when he dropped down upon the polished decks of the Scarlet Night. The gentle tip of the boards shifting beneath his feet, the smell of tarred rigging, and the sight of her three thick masts brought a smile to his  face. He was home.

International Talk Like a Pirate Day is more than just donning an eye patch and saying “Aaaaarrrgh!” It’s about stepping into the tall, bucket-top boots of history. It’s about dismissing myth, and knowing the facts about some of the most fascinating criminals of the sea! So grab a mug of mead and a heaping bowl of salmagundi and let’s talk pirates!

Let’s start by dressing the part. Most pirates’ clothing was stolen from their prey. Captains picked the nicest and most fashionable garments so everyone would know, “Hey, look at me, I’m the Captain!” There are reports that captains fearing capture would rush below deck and change into something less fancy so they could blend into their crew and receive an easier punishment. 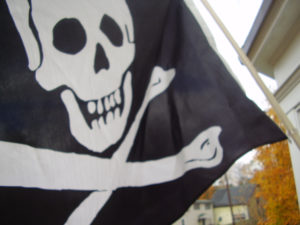 How about an earring? There are a host of reasons and theories regarding pirates wearing earrings. Some believe an earring marked the first time the sailor crossed the equator, or sailed the vicious waters around Cape Horn. Others claim that sailors believed precious metals pierced through their earlobes actually improved their eyesight. There is another theory that the gold and silver was to pay for their funerals. With their names and home ports engraved within the hoop, if they washed up on shore, their bodies could be sent home. And yet another reason for an earring is to hang waxed earplugs from in case you were a gunner and too close to those exploding cannons! Me…I just think they made those seafaring bad boys a bit more rakish.

There is some debate regarding eye patches. Yes, there’s evidence of pirates losing arms, legs, and eyes. But some believe that eye patches were worn so pirates could keep one eye adjusted to seeing in the dark found below deck. Black Beard had a wooden leg, but it wasn’t due to a 10lb. cannon ball removing his limb. It was due to diabetes. If a pirate lost a leg in battle, most times they never survived the injury, and it certainly ended their career. It is true that Captain James Hook did have an iron hook that replaced his missing hand, however. Here I thought that was only Peter Pan fiction!

Speaking of fiction… there is little evidence of anyone ‘walking the plank.’ If pirates want you tossed into the water, over the rail ye went! Of course, there were more gruesome forms of punishment. Flogging, marooning, keelhauling, and hanging…by various parts of your body…from the highest yardarm!

Also, there’s no record of a pirate having a parrot as a pet. Cats were common aboard ship to keep the mice and rat population at bay, (FYI…white cats were considered bad luck.) but parrots were seen more for the money they would bring than for a colorful shoulder accessory.

Not all pirates were cutthroats. In fact, they were fairly civilized. Rules were strictly followed regarding fighting amongst the crew, gambling onboard, compensation should you be wounded or killed. Everyone received a fair share according to rank and decisions were made by democratic vote. Stealing from a crewmember was a major no no.

There were ‘gentlemen’ pirates who were well known for treating their crews and captives well. Stede Bonnet was one of these gentlemen pirates. He was a wealthy plantation owner when he decided to buy his own ship and take to the sea. It’s rumored that a nagging wife was his motivation to become a pirate, or a mid-life crisis! Black Bart Roberts gave his musicians Sundays off.

Being a pirate was a decent way to make a living. In fact, a lot of sailors signed on to pirate crews because the Navy’s pay checks just didn’t go very far in the 1600’s. Long Ben Avery wasn’t a pirate for very long, but made the richest haul and retired less than a year after he started. And speaking of richest treasures, it is said, Oliver Levasseur had treasure estimated into the billions. When he was captured and brought to be hung, he pulled a necklace from his neck and threw it into the crowd. It contained a cryptogram of 17 lines. He shouted “Find my treasure, the one who may understand it!” Treasure hunters are still trying to ‘understand’ it.

Some pirates were brutal, vicious barbarians, however. Black Beard used to stick lit lengths of rope under the brim of his hat so smoke would circle his head and his prey would believe he was possessed. Francis l’Olonnais cut out a prisoners heart and ate it in order to get the other prisoners to cooperate. His crew deserted soon after. There’s pirate crazy…then there’s pirate ‘l’Olonnais’ crazy!

And of course, I can’t possibly write about Talk Like A Pirate Day without mentioning those incredible, bad-ass, ‘tough-as-hardtack’ women who fought as pirates throughout the golden age and beyond. Anne Bonney, Mary Read, Grace O’Malley, Rachel Wall (the only female pirate from New England—and the last pirate hung in Boston Common.), and my personal favorite, Ching Shih. Ching Shih was the most powerful of all pirate queens. After being pulled from a life of prostitution to marry, and her husband’s subsequent death a short three years later, Ching Shih became one of the most feared female pirates of her time. She terrorized the Chinese coast and amassed a huge fleet of more than a fifteen hundred ships and captained more than 70,000 men. She was very fond of beheadings, and deserters who just wouldn’t listen to reason…they saved their heads, but lost their ears!

I wonder what happened to all those earrings? 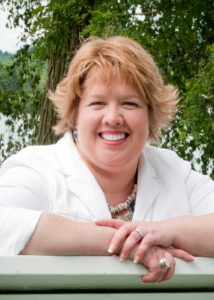 Lisa A. Olech is an artist/writer living in her dream house nestled among the lakes in New England and is a lover of all things pirate. A Jolly Roger flies off the flagpole of her home!

She loves getting lost in a steamy book, finding the perfect pair of sexy shoes, and hearing the laughter of her men. Being an estrogen island in a sea of testosterone makes her queen. She believes in ghosts, silver linings, the power of a man in a tuxedo, and happy endings.