Desiree's Place > General > Day #3: 8 Days of Christmas. Today a Touch of Magic and another prize

Day #3: 8 Days of Christmas. Today a Touch of Magic and another prize 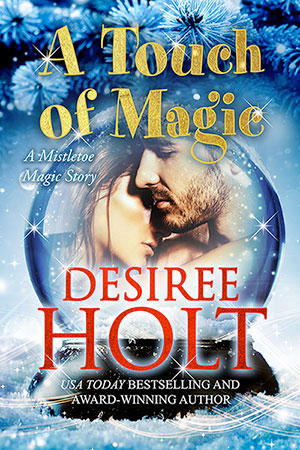 Today we’re bringing a touch of magic to Christmas. This is one of three books in the Mistletoe Magic series I wrote with Regina Carlysle and Cindy Spencer Pape. So be sure to check out Whispers of Magic and Breathe of Magic, too.

Maddie Woodward is in a pickle. The last person she expects to see when she returns to the family ranch for one last Christmas is her former lover, Zach Brennan. He’s hotter as he ever was, all male and determined to get her naked. She’s just as determined to show him she’s over him—until she ends up in his bed, enjoying the wildest sex of her life. A night of uncontrolled, erotic sex shows her that Zach is far from out of her life. Now if she can just get him to help her convince her sisters not to sell the ranch—or sell it to the two of them. 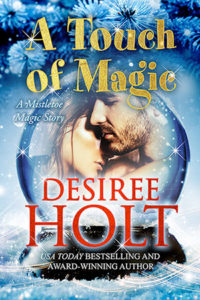 Zach Brennan. Here, on her ranch. How could life be so cruel?

His stood in front of her now, tilting his hat back just enough so she could see the glint of light in his coffee-colored eyes. His skin was tanned as if he spent a great deal of time outdoors and there were fine networks of lines at the corners of his eyes and his mouth.

She had to focus on something else, because all she could remember was the last time they’d been together and the wonderful things that mouth had done to her body.

Maddie wondered if he was still riding the rodeo circuit. Like a nail poking into an open sore, she’d kept up with his career until she couldn‘t stand it any more. She knew all the silver buckles he’d won, all the grand prizes. Not to mention, she was sure, the adoration of dozens of buckle bunnies. That had been her last sight of him, twenty-five years old and a walking bottle of testosterone, surrounded by rodeo groupies in the beer tent, ignoring her last-ditch effort to talk to him, winking at her as he leaned in to kiss the brunette hanging on one arm.

“Hello, Maddie.” His voice was like aged whiskey—smooth as silk but burning its way into her body. “Ty said you’d be the first one to arrive.”

Ty Blackwell, Zach’s friend and her older sister Liza’s lover years ago, was handling the estate of her parents. But just what did Zach have to do with that?

She had to swallow twice before she could get words out in something approaching a normal tone. “I was sorry to hear about your mom.”

Pain slashed through his eyes, darkening them. “Yeah. That was a bad scene.”

“I heard your dad sold your place and moved to Colorado to live with your brother.”

Zach gave a brief nod. “He was pretty lonely after Mom died.”

Maddie screwed up her courage. It was now or never. “What are you doing here?”

A hint of a grin kicked up one corner of his mouth. “I guess that gets it right to the point, doesn’t it?”

“I don’t see any point in beating around the bush. Where’s Jack Grady and the rest of the hands? What’s going on here?”

“Grady got kicked by the new bull your daddy had just bought about a week before the accident. At his age that’s not such a good thing. His doctor thinks he might not be able to come back to work.”

Maddie wet her lips. “That still doesn’t answer the rest of my questions.”

“The hands are out taking care of business. I’m here because Ty needed someone to run the ranch until you and your sisters sign the papers to sell it.”

Maddie felt as if a giant fist had just punched her in the stomach. “Sell the ranch,” she managed to get out. Well, she hadn’t told Ty about her decision yet. Or her sisters. She supposed she should be grateful he hadn’t left the ranch to its own devices.

“Yes. I understand that’s what y’all plan to do.” He moved closer to her so their bodies were almost touching. His hand reached out to cup her cheek, his thumb lightly stroking the skin. “I’ve missed you, darlin’. More than you can possibly know.” 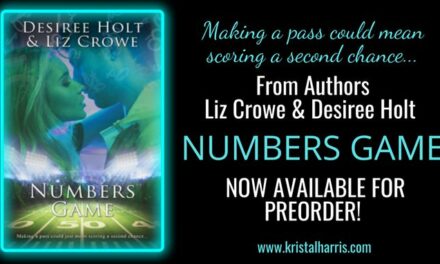 Ever thought of a football game as sexy?

Is that a gun in your pocket? she asked