Comment for a chance to win a $10 GCFeatured authors:

SEAL of Her Dreams by Paige Tyler
When Navy SEAL Kurt Travers fills in for his buddy during career day at school, he doesn’t expect to fall for the teacher. But Melissa Drake lives by one hard and fast rule. She doesn’t date Navy guys–ever. Will saving her life change her mind?
Enticement By Sierra Cartwright
Ella Gibson, his little sister’s best friend, is definitely off-limits. But when Special Forces Staff Sergeant Pierce Holden sees her about to make a big mistake with another Dom, honor, duty, and his physical attraction to her compels him to step in. 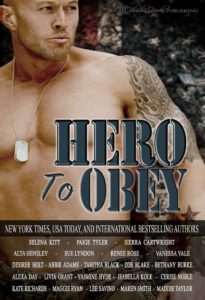 Spoiled heiress Darcy Haverford and ex-military beach bum Daniel Colvin find themselves shipwrecked on a desert island and they discover the key to survival is both discipline and surrender.

Stormy Weather by Desiree Holt
The storm outside whipping the surface of the bay into whitecaps wasn’t nearly as intense as the one raging inside Zane Colby. He was a warrior and used to destruction and devastation, but this time it threatened to push him over the edge. The last thing he needed was Dara, a waif who nearly drowned in the turbulent water in her haste to run from a violent situation.

A Hero In Disguise by Alta Hensley
Kidnapped and brought to an isolated militia compound in the backwoods of West Virginia, Jessa Crowe realizes there is much more hidden in the dark depths of the hemlock trees.
She is surrounded by hate, sex, torture, and death. Only to be claimed by the devil himself–Decker Cassidy. But what Jessa soon discovers is that her captor may very well be her hero in disguise.

The SEAL’s Captive Bride by Sue Lyndon
In the aftermath of a horrendous war, former SEAL Rick Stanford catches a pretty little thief sneaking around the settlement he’s charged to protect. Rather than see Ally tried for her crimes, he protects her in the best way he knows how–by claiming the reluctant young virgin as his wife.

In His Hands By Maggie Ryan
Betsy Riddle considered it her patriotic duty to lift the spirits of soldiers fighting for their country. Little did she know that her newest pen-pal, Mr. Bossy, would be the one man who stole her heart. With every letter he received,  Major Jackson Sommersby  knew that the moment this horrid war ended, he’d be taking a certain little minx in hand and showing her that paradise was found in his arms.

Owned by the Marine by Renee Rose
He may live next door, but he sure as hell wasn’t the boy next door.
When Marine Sergeant Rob Gentry moves into his new apartment, the last girl he wants to date is his neighbor. Smoking hot and so cute it makes his teeth hurt, she’s not his type. Too sweet. Too innocent. Too vanilla. …or so he thinks.

Under His Command by Maddie Taylor
After twenty years in the field, Navy SEALs Commander Flynn Dalton is ready to put down roots.  Settled at Coronado island, he trains new recruits by day while searching for his perfect submissive by night.  Too bad the one woman he wants to claim as his own is too young, too shy, and too damn vanilla.
Understanding the Enemy by Tabitha Black
She can resist anything. Except him.
When Lena is captured and interrogated by a handsome militia sergeant, she’s determined not to reveal anything; no matter what he intends to do to her. But Blaze Fielding has big secrets of his own… and very special ways to get Lena to talk.

Devil Dog by Lee Savino
There he was, on the eve of my divorce, the yummiest thing in the coffee shop. Tall, tattooed, made of muscle. He was my hero. I just didn’t know it yet…

Her Captain’s Command by Isabella Kole
When a former love surprisingly arrives as the new XO on his ship, how will Captain Blaine Rogers handle her stubborn attempts to defy his authority? Will old feelings get in the way or will a spark be rekindled?

A Little Love by Maren Smith
From the moment he saw her tattoo, Sergeant Nolan Anderson knew Tricia was meant to be his. But they were neighbors and, worse, he was broken. She deserved so much better from the man who became her Dom and yet, now that he’d held her, how could he ever let her go…

Their Runaway Bride by Vanessa Vale
A surprise prequel to the USA Today bestselling Bridgewater Menage Series. Learn how the two military men save a runaway from her ruthless father. You’ve met Anne and her two husbands, Robert and Andrew before. It’s time for their story!

Worth Fighting For by Zoe Blake

When you agree to help your best friend break into an apartment, you can expect a few complications. A half-naked, hot-as-hell Marine bursting in demanding to know what is going on, is not one of them! The last thing Sage needs is some arrogant male ordering her around. Unfortunately, Conner is determined to make her his…even if he has to fight her every step of the way.

A Soldier to Cry On by Abbie Adams
Sergeant Anthony Jerard hunts down the wife of the soldier dying in the hospital bed next to him during the first days after he suffers a traumatic brain injury. He intends to pass on the deathbed apology of which he hasn’t a clue to the nature of. What he doesn’t intend to do, is fall ass over teakettle in love with the often captivating, but more often infuriating, little widow.

Call Sign: Thunder by Livia Grant
Zach wasn’t supposed to be there, but he was Allie’s only hope of getting out alive.  Even if she gets out with her life, could she survive the horrific memories of her time in the hands of her diabolical captors?

Passing Through by Alexa Day
The summer’s brought two surprises to bar owner Gigi Deane: the former Army Ranger she hired is the perfect barback, and he takes orders in bed as well as he does on the job. He’s told her that he’s just passing through, but as the seasons change, can she convince him to make their summer thing a little more permanent?

Bound By Her Captain by Kate Richards
The heat between a  US Coast Guard Captain and a beautiful, brilliant Soviet scientist might do a better job of melting the polar ice than the ship when they combine forces to hunt down a possible sea monster in Cold War Era Alaska.

With One Hand Behind My Back by Cerise Noble
Irene’s determined to follow her Marine, Drew –  the love of her life – everywhere. He leads, she follows; from duty station to duty station, from base to base. When he’s wounded, everything changes. Can she submit to a man who’s body was broken?

Exfil  by Bethany Burke
Archeologist Emily Becker’s “simple and quick” clandestine trip into Syria to recover a precious artifact turns out to be neither.   Stuck in a bombed out basement with some serious heat on her tail, she needs “exfil,” extraction from a dangerous situation by someone who knows what he’s doing. Delta Force Mission Specialist Michael Duncan definitely knows what he’s doing. He would fit the bill except for one thing:  he also knows Emily, and their history is not a happy one.

Aim for Pleasure by Yasmine Hyde
Kerrigan’s military career is coming to an end. At last she will be able to dedicate her time to the business she started years ago with her sister. She just has one more function to put on for the General she works for, then she’ll be bound for civilian life. The night before the event she lets her friends take her out to a bar to celebrate. When a moment of peace turns into a chance at passion, she is drawn in and taken on a ride of ecstasy. She never expects to see the mystery man from her one night of recklessness again, but when he turns up in the place she least expects him, she can’t keep him at arm’s length.