Desiree's Place > General > Could she dare to chance it one more time?

Daring to Chance it

My story for the wonderful Carly Phillips Kindle World,. Dare to Love, has been out for a while but I love it so much I have to share again. If you missed it the first time around, here you are. 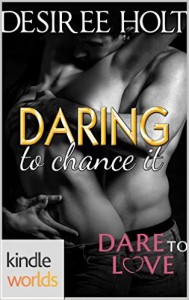 For the next couple of hours she buried herself in the stack of contracts she was reviewing. Her admin, Jenny, brought her lunch from the facility dining room. She ate with one hand while she made notes with the other. She paid no attention to the time until Jenny came in to remind her of the press conference.

Sarah couldn’t help wondering who it was. There had been a lot of very high profile players available as free agents this year. By this time she figured she’d just find out when she walked into the room where it was being held.

“Meeting room on the second floor,” Jenny told her. “Have fun.”

Fun. Right. Another overgrown jock totally full of himself. She loved the game but she lumped all the players in the same category as Beau Perini. They were great on the field and lousy on the relationship stage. Sure, a lot of them were married, some of them even happily. But to her those were the exceptions.

She smiled and nodded as she joined the flow of people heading to the press conference.

“Glad you could join us for this, Sarah.”

Rod Dematteo, Director of Football Operations, walked up beside her, shrugging into his sport jacket.

Sarah looked—and froze. No, no, no. Life could not be playing such a cruel joke on her. Why oh why was this happening to her? It just wasn’t possible.

Beau Perini, in the too, too, too very real flesh.

He looked over and spotted her at the same moment and stopped in midstride, staring.

“Sarah?” He blinked as if unable to believe his eyes.

She certainly knew how he felt because she had the same feeling. For a long moment she couldn’t breathe and she was sure her heart had stopped beating. Oh, my god. This was the Thunder’s hot new star running back?

Yes, indeed. It certainly was. And just as gorgeous as ever. A little older, a little more muscular, and looking better than he had a right to. She had to stifle the urge to run back to her office, lock the door and hide. How on earth would she ever get through this? She felt hot then cold then hot again as the familiar feeling from six years ago smacked right back at her.

Ian looked from one to the other. “Do you two know each other?” he grinned. “Great. That’s great. Sarah is the new In House Counsel for the Miami Thunder.”