Desiree's Place > General > He’s back! Her Wolf From the Past

He’s back! Her Wolf From the Past

Wolf from the Past

Sylvie LaForge Dubois knew coming back from the dead wouldn’t be easy, but facing her brother and his friends is harder than she imagined. The way Gator Rollins watches her every move makes her decidedly uneasy and excited.

After surviving a forced mating to the abusive Andre Dubois, having a rugged, dangerous werewolf like Gator sniffing around her is scary and thrilling at the same time. She never imagined she’d want another man, but her bone-deep attraction to Gator is too strong to fight.

Gator never got a chance to tell Sylvie he loved her before she was mated with another and, well, died. Now that she’s back, there’s nothing he won’t do to protect her.

Once word gets out, Sylvie’s former pack will be coming for her. No one leaves the Louisiana pack, especially not a female werewolf. But Gator’s determined that this time he won’t let anyone or anything get between him and Sylvie, even if she can’t decide if his touch makes her want to jump his bones…or run for the hills.

There was something in the air. Gator straightened away from the railing. “I’m going to check on the women.”

Jacque’s gaze snapped toward him. “You hear something?”

He shook his head. “Just restless.”

The alpha narrowed his eyes but nodded. “Cole can fill you in on everything later.”

“I can hear your plans when you tell the women.” It was a not so subtle reminder that the women needed to know everything they discussed.

One corner of Jacque’s mouth kicked up in a grin. “Persistent bugger, aren’t you?”

Gator raised his hands in surrender. “Hey, that’s what all the women tell me.” He grinned when all he really wanted to do was run. The itch in the back of his neck was growing more irritating. There was something happening that needed his attention. He didn’t feel as though the women were in danger but better to make sure.

N.J. Walters is a New York Times and USA Today Bestselling author who has always been a voracious reader, and now she spends her days writing novels of her own. Vampires, werewolves, dragons, time-travelers, seductive handymen, and next-door neighbors with smoldering good looks—all vie for her attention. It’s a tough life, but someone’s got to live it. 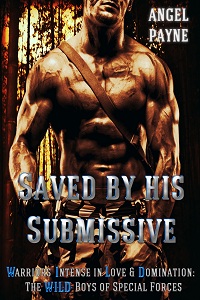