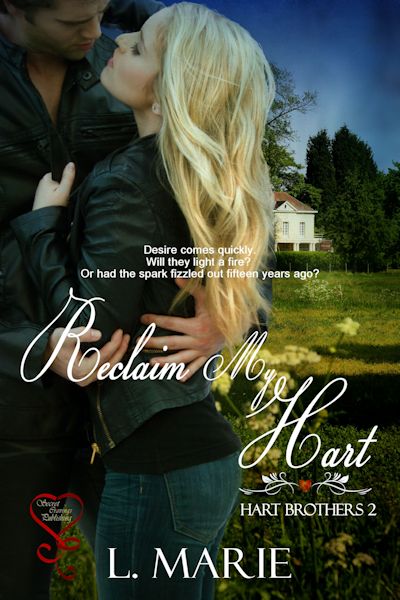 Boyd Hart is content with his life. He’s a licensed contractor who has a way with wood. He, and his brothers, are rehabbing an old farmhouse. Imagine his surprise when the first love of his life, Sunshine O’Hare, returns to Haydensburg and buys the house before it’s even finished. Old feelings are rekindled and Boyd’s ready to burn.

Sunshine O’Hare is a woman on a mission. A mission to seduce the first person she’d ever loved. They had fallen in love as teenagers and she’s carried the torch into adulthood. She had to walk away from him fifteen years earlier and she wants back into his life. She can only hope he’s a willing participant in her grand scheme.

Desire comes quickly. Will they light a fire? Or had the flames fizzled out fifteen years ago? 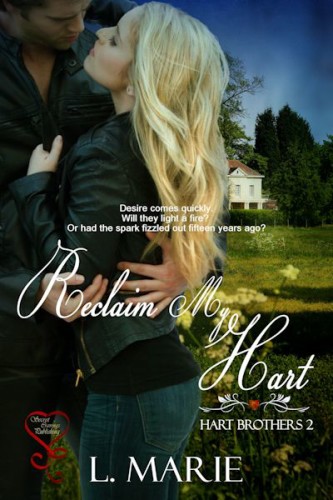 The hours ticked by, and he thought perhaps there had been a change of plans and Sunshine wouldn’t come around. The afternoon sun slanted through the windows. He glanced at his watch. Only three o’clock.

A stack of two-by-fours that he had marked earlier needed cut to length or ripped, so he started that task. The repetitive action of placing a board on his chop saw, cutting through it, and then tossing it aside became cathartic. His mind emptied of everything except his love of carpentry. The whine of the saw. The sawdust flying in every direction. It calmed him.

A hand landed on his shoulder, and he completed the cut he was doing. Then, he spun around, expecting to see one of his men.

Instead, his heart leapt into his throat.

He needed a moment to gather himself so he turned off his saw and laid the most recent board on the pile. After taking a deep breath, he faced her. “Hi,” he began.

That was as far as he got.

Suddenly, Boyd found himself securely in a bear hug. Her ample breasts were crushed against his chest. At a loss, he awkwardly returned the embrace, lightly patting her back.

She released him. “Sorry. I just planned on saying hello and shaking your hand. But…” She toed the floor with the tip of her shoe. “I guess I became overwhelmed.”

He smiled. Sunshine had grown into the most gorgeous woman he had ever seen. She’d gained maybe only an inch or two height-wise, leaving her at roughly five-foot five-inches. But gone were the straight lines. A shapely, hourglass figure had replaced them. The billowing, multi-colored skirt she wore enhanced the curve of her hips, and the hot pink of her tank top did little to hide the lushness of her full breasts. Even the bright pink polish that adorned her toenails, left bare by the open toe of her sandals, turned him on.

Boyd was afraid all his blood would rush to a certain part of his anatomy. “You’ve changed,” he finally managed.

She glanced down at herself and chuckled. “Yeah, I guess I have. I’m not the stick figure I was when I left.”

“No. You definitely do not have a stick figure.”

She giggled again, and Boyd’s heart thudded hard in his chest. Just as it had the day she had told him she was leaving. When he’d realized she was much more than a friend.

And now, he wanted. Wanted to be with her on a level far beyond mere friendship. He locked gazes with hers, and soon, the pull of her turquoise-colored eyes began to drag him in.

He’d never been so drawn to a woman. Sure, he’d seen plenty of pretty ones, but the woman standing before him made the rest look homely and common. He didn’t understand how Sunshine could enrapture him by nothing more than being in close proximity, but the need to gather her to him again almost became more than he could take.

Instead, he’d admire her from afar.

However, she was a temptress, and he had a feeling he’d give in to temptation eventually.

But he was good with that.

I live in Pennsylvania just a hair shy of the Maryland border. I live with a family I adore which includes two furry feline children and a furry canine daughter. In my spare time, I’m more than likely watching television. I watch Bones, Blue Bloods, NCIS:New Orleans, or some sort of car show like Wheeler Dealers. I’m a huge sports fan, football in particular. During the fall/winter, I’m watching Notre Dame or Penn State on Saturdays and the Saints or Colts on Sunday. I’ve been known to have my nose buried in a book. Nora Roberts/JD Robb and Clive Cussler are favorites of mine. I know, I know…Clive Cussler isn’t a romance author. The man can weave a tale of adventure like no other!