Love You Madly by Ashlee Mallory

Enter for a C

About the book: Meredith Sanders was the golden girl in high school—a homecoming queen with a trail of worshipping minions. Now she’s all grown up with a trail of failed marriages. The only good thing she has in her life is her brilliant and beautiful teenaged step-daughter…who’s missing. But the best man for the job has a serious hate-on for her.

Back in high school, queen bee Meredith made Travis Brennan’s life miserable. Since then, he’s gone from class geek to a hardened, former SEAL, specializing in private security. As much as he wants to help Meredith’s step-daughter, he can’t help but clash with the gorgeous woman who once made his life hell.

But as they investigate the increasingly mysterious disappearance, their conflicted past threatens to turn into a very provocative present…

About the author: Ashlee was thirteen when she discovered her first Kathleen E. Woodiwiss book hidden away in her mom’s closet. After two days of staying home “sick” from school to finish it, she was hooked. Her rabid love for romance has continued ever since and after a misadventure in the world of law, she is finally settling into her dream job of writing about people finding their happily ever afters.

She turned, about to toss the pill in her mouth, only to find Travis’s hulking body in front of her.

A scream tore from her mouth followed by the sound of shattering glass. Cold water splashed at her feet.

“Don’t move,” he said and stepped forward enough to grab her by the waist and lift her into his arms to carry her past the broken glass. It happened so fast that it took her a moment to realize that she was being held in the warm arms of the very man she’d come down to try to forget.

The thumping of his heart under her hand made her aware she had braced her hand against him.

And that he wasn’t wearing a shirt.

Immediately she wanted to run her fingers across the smooth expanse of skin, to see if he’d tremble at her touch. She shook her head. Madness.

She should move her hand. There was no need to brace herself for anything now that they were completely still. But she was loath to remove it, the intimacy so comforting and heart-stopping at the same time. She looked up to see he was watching her, his mouth quirked in the slightest smile. So rare it made her stomach twist—not uncomfortably.

“I heard you on the stairs.” Of course he had. “Wanted to make sure you were okay. Did something happen?”

Other than realizing she’d completely lost her mind where this man was concerned? No. Nothing had happened. She shook her head.

True to his word, he had showered, and he now had a clean soapy smell, stronger than the more musky and sweaty scent of earlier, but neither less nor more appealing.

“Are you going to speak anytime soon? Because in the entire time I’ve known you, you’ve never stayed silent this long.”

How could she form words when it was taking every ounce of control she had not to press herself against that hard chest, to nuzzle his smooth skin with her mouth?

Okay, now that was ridiculous. She’d never do anything so foolish. “I think I’ll manage,” she said, her tone more imperious than she’d intended, but at least she’d spoken.

He released her legs first, and she slid down his body. His smile disappeared. 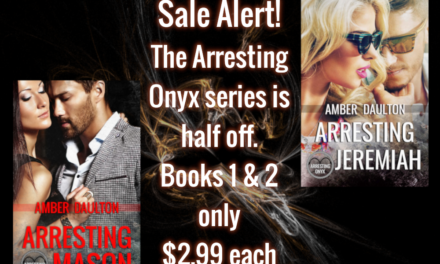 Danger! Heat! Intense attraction! And the threat of a national attack.