The Sons of Dusty Walker: Killian (Book 3) by Desiree Holt

To say Killian Walker was shocked when he discovered that not only was his father not married to his mother, but he had three half-brothers in the same situation. Facing each other for the first time at the reading of Dusty Walker’s will, the atmosphere could best be described as hostile. The terms of the will didn’t help matters. Spending a week in Red Creek, Kansas in Dusty’s house and Dusty’s business was just not on his agenda of things to do. But if he wanted the money to start his own ranch, he’d have to grit his teeth and man up.

Lexie Choate had big dreams about success in the world of art. Her teachers at Savannah School of Art praised her talent and told her she was a shoo-in to win the prize of a gallery show of her own. The last thing she expected was for the man who stole her heart to also steal the prize from her. She ran back to Red Creek, to heal her broken heart and recover from her disappointment. As the owner of Heart Starter, the popular coffee shop in town, she was busy building a new life for herself, while she continued to paint in secret. Hope never dies.

When Killian walked into Heart Starter the chemistry between the two of them was instant and explosive, but neither of them was looking for anything long term. She wanted to get back into the world of art. He was planning to build his ranch and not in Nowhere, Kansas. One week, they agreed. One week to enjoy each other, then goodbye. Funny thing, though, just when you think you’ve got everything planned out, life has a fanny way of turning your life upside down. 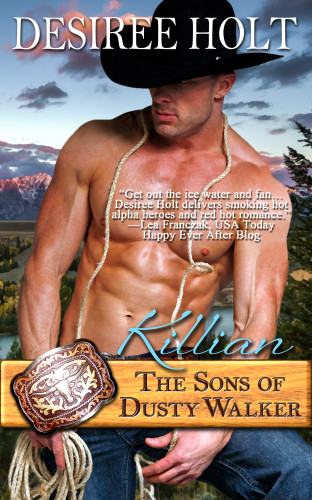 Killian paid the check then stood up and waited for her to slide from the booth. When they walked to the SUV he kept his hand on her arm. He moved it to open the door and Lexie missed the warmth of the contact at once. He again helped her into the seat and buckled her belt for her. This time when his face was so close to hers she could feel his breath on her cheeks, he leaned forward that last little bit. She held her breath, waiting to see if he’d move away again. But no, he pressed his lips gently against hers in the briefest of kisses. Still, even with that light contact, the heat it created set her blood to boiling and the pulse in her pussy pounded with long-suppressed need.

Without thinking she opened her mouth slightly and Killian’s tongue swept in like a sword of flames. The kiss was so intense it stole her breath but she never thought to break away. At last he lifted his head and looked at her with ravenous hunger. She could tell he was as stunned by the reaction as she was.

He just stared for another long minute before closing her door and jogging around to the driver’s side. They were both silent on the drive back to her place. When he walked her up the stairs to her door he kept his hand on her as if needing to maintain contact. On the landing he turned her to face him.

“I’m not coming in, Lexie. I’d like to think I’m too much of a gentleman to act on what I want to do with you on our first date. But trust me, there will be others. So if you want me to stay away, now would be the time to tell me.”

Her heart pounded so loud she was sure he could hear it. “I want that.” The words were a whisper.

He pulled her into his arms and cupped her head with one large hand. His scent surrounded her as did the strength of his body. When he pressed her to him she could feel the unmistakable bulge of his cock even through the thick denim. It pressed hard against her mound, the contact causing a flood of moisture to her panties. Could he smell the fragrance of her arousal?

This kiss was deeper than the other, more intimate. He licked every inch of the inner surface of her mouth, brushing his tongue over hers in an erotic dance that made her weak with wanting. She clutched his arms, fingers tightening on ropes of hard muscle, the heat of his body scorching her hands. She had an insane desire to rip off his clothes so she could run her hands all over his naked body. Just at the point where she had forgotten to breathe he lifted his head. The look in his eyes told her he was as affected as she was.

“See you tomorrow.” His voice was thick with desire. “Keep my cinnamon buns warm.”

“Of course.” But she wasn’t thinking of pastry when she said that. “See you.”

Get it at AMAZON