Desiree's Place > General > What happened when he found her beneath his bed?

What happened when he found her beneath his bed? 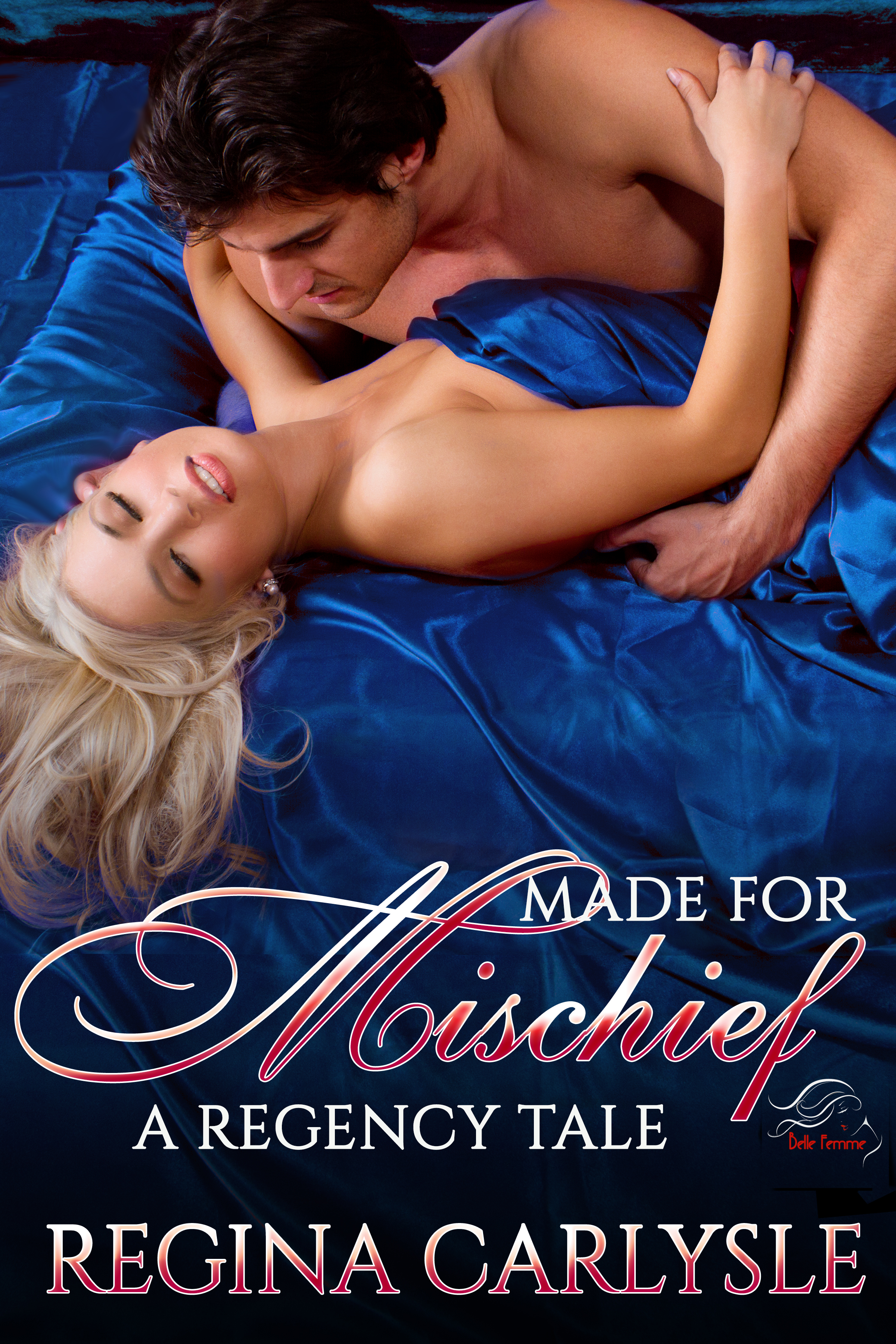 All she really wanted was one naughty night before returning to her life as a sheltered country spinster! Crawling beneath a bed in London’s most notorious brothel was beyond the pale, even for known eccentric Arabella Spencer. Little did she imagine that lust, desire, and yes, love was just within her grasp. When Grayson St. James, Lord Mercer, newly returned from fighting Napoleon, dragged a squirming, dusty bluestocking from beneath his bed, he was…well..aghast! She wanted adventure, did she? She wanted to learn about sex, did she? He was just the man to teach her! As a vow of vengeance and a case of mistaken identity unite Grayson and Arabella in a common goal, the dour Lord Mercer finds himself laughing for the first time in longer than he can recall but will an unknown threat bring them together or tear their world apart?

Glancing toward the town hall entrance, she caught a flash of scarlet, a dark head bent near the rapidly speaking vicar’s wife. Mabel stood next to Berta, mouth agape, as the man turned to bow low over her outstretched hand.

Of course, she knew this must be Lord Mercer, come to greet the villagers after his long absence. Narrowing her gaze, lifting the quizzing glass for a better look, she felt the thick, circular lens slip from nerveless fingers and her eyes popped open wide in disbelief. The beat of her heart paused then lurched wildly.

No! It couldn’t be! Could it? Her heart thudded within her chest as a ball of dread caused her throat to clog tighter than a miser’s fist.

“Are you all right, Miss Arabella?” Abner asked.

She couldn’t speak over the knot in her throat. She made a garbled sound and continued to stare in disbelief, barely noting Abner’s possessive touch on her shoulder.

All noises dwindled to a mere pinpoint of sound that seemed to come at her as if through a dark tunnel. She thought she might swoon when she was not the swooning sort at all. She would know those broad, broad shoulders anywhere, just as she would recognize that cruel slashing smile.

Gripping the china plate in white-knuckled hands, she stared, horrified. Backing up cautiously, struggling against the need to bolt from the room like a frightened rabbit, she halted at the feel of something hard and firm at her back. It was Abner, of course. Dazed, she watched as the dratted man said something to Berta Morrison, who smiled and turned her gaze in Arabella’s direction.

Black eyes widened, and then abruptly narrowed, in sudden comprehension, darkening in cruel delight. God help her, the dastardly man from London, the man who’d stolen her every waking thought was here. Tonight!

He stood head and shoulders above everyone else so it wasn’t difficult to determine that he was heading her way. She tried to back up another step, as the crowd parted to let him pass.

Without missing another beat, the denizens of Upper Biddleton returned to their dancing, their conversations, never knowing that the life of one of their own was about to change drastically.

“Toodle ooh, Arabella, dear. Toodle ooh!” Berta warbled in a trilling voice as she marched elbow to elbow with the soldier bearing down on her. Mabel, gasping to keep up, eyes alight with interest, hurried from behind as she struggled to keep pace.

Should she not know the name of the man who was about to murder her? The wild thought flashed through her mind as she took note of his blacker than sin eyes and the dangerous glint they contained. Her own Mr.Gray, who was in reality bloody Lord Mercer, would kill her or ruin her and at the moment, she wasn’t quite sure which was worse.

When he lifted his head, she thought she might die. A black brow arched in a mocking manner over his left eye. Memories of him had not done him justice, she thought wildly, as her heart took up a rapid pitter-patter within her chest. What was it about a man in uniform that was so very striking? The red coat of His Majesty’s army was splendid with his dark coloring. Dear, God! She was going to faint dead away.

Not again. His gaze slid mockingly over her body, and she fought the urge to cover her exposed chest with her gloved hands.

Fear threatened to choke her. He looked so angry, so very mean. Obviously, he had not forgiven her for disappearing from his bed. Would he ruin her now? Destroy her spotless reputation with just a word?

But, then another thought intruded, more horrifying than the last.

This man was sweet Andrew’s brother. The surly, moody half-brother of her late fiancé.

Dear heavens! It couldn’t be. It just couldn’t. With a gasp of despair, she released the china plate she clutched and it fell from her numb fingers adding to the sudden silence that had fallen among the tidy group. She was caught now in the web of her own making while they stood there without a clue that the world had suddenly, and quite devastatingly, shrank in size.

“Dear heavens.” She gasped as the fragile plate broke neatly into three pieces. “Just look at what I’ve done.”

“Never you mind, Arabella,” Berta soothed. “’Tis not important.” She turned a teasing scowl on Lord Mercer. “And you, good sir, must wait for a proper introduction, if you please. Did you leave your manners on the field of battle? Lord Mercer, this is our very dear Miss Spencer who has lived in Upper Biddleton these past eight years. Arabella, dear, this is the prodigal Grayson St. James, Lord Mercer, and as you already know, your very own Andrew’s brother.”

Arabella stood gaping, trying for all she was worth to appear calm. “And this,” Berta continued with a twinkle in her eyes, “is my son, Abner, who is a very, very close friend of Arabella’s.”

Hell’s bells! Obviously, Berta saw more in her friendship with Abner than just simple courtesy. Another problem to add to the confused morass that was her life.

“Mmm, another conquest now that my poor brother dwells in the afterlife?” Though the words were delivered softly, she flinched at the steely glint in Grayson’s eyes.

She gasped. “Merciful heavens, no!”

But, she might as well not have spoken for the two men were busy exchanging guarded greetings while Berta and Mabel had struck up their own private dialogue. She was for just an instant, very much alone.

Casting about for a way out, perhaps a very quick retreat, she ignored the social niceties and discreetly backed away. A press of bodies moved closer, effectively separating her from this nightmare of a man.

Oh yes. She knew what he was. He was a debaucher of young ladies and a kidnapper with an evil sense of humor.

Step by step, she moved closer to a row of open windows and the safety of a back door. But, just as she stepped past the threshold, she couldn’t resist another peek.

Black eyes bored into hers, and she swore it was like looking into the eyes of a cobra. He was very angry but, as yet, had not seen fit to ruin her reputation. Eager for a respite, she did the only sane thing she could do. She ran.