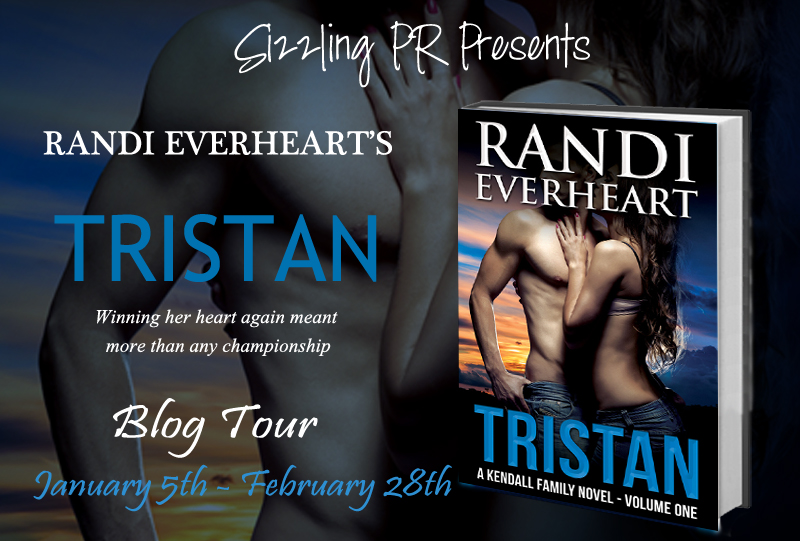 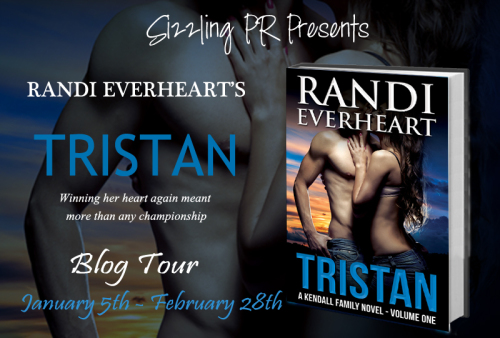 Five years ago, Tristan Kendall left home and the woman he loved to prove himself on the sport bike racing circuit. With his career briefly on hold, he’s come to realize everything – and everyone – he ever wanted was right at home all along. Now he’s determined to win back her heart no matter the cost.

But Victoria Lane’s been through more than Tristan knows since he broke her heart. No longer the girl he once knew, she has a life to live, and a heart to give, but only to someone who’s planning to stick around. And she’s sure that isn’t him. Can he convince her that she’s the only victory lane he wants to be in?

Tristan Kendall wove his blue Yamaha R1 motorcycle in and out of traffic on I-270 in Maryland at over 140 mph. His sport bike was a marvel of engineering that allowed a rider to aggressively mate with it like two lovers in spoon position. Speeding up as he neared his hometown, he glanced in the rearview mirror. The cop behind him had grown smaller and smaller with each mile, but Tristan knew that if he didn’t get off the highway soon, police reinforcements would arrive. They’d never catch him, but one picture of his license plate and he’d get more than just a speeding ticket. Assuming he didn’t wreck and end up dead.

When he pulled off onto the winding back roads and slowed down, the cop didn’t see him exit. Familiar sights caused memories of home to return. He hadn’t been back in five years and more houses had sprung up. The plague of suburbia seemed to crowd in a bit more on the rural town of Comus, creeping up from D.C. to the south. One day there’d surely be a skyscraper in his backyard, but for now rolling farmlands dotted the landscape. Despite his familiarity with the roads, he rode them cautiously, his green eyes alert for patches of dirt or leftover road salt from winter storms. They could send him skidding off the pavement.

As if to prove his point, he came around a curve to find that another sport bike and its rider weren’t wrapped around each other anymore. The bike was upside down against a sapling. The rider stood with hands on hips, staring at the flipped-over Suzuki Hayabusa that no one would be taking for a spin anytime soon by the look of the chain, which had disengaged from the rear sprocket to drape near the ground. The clutch lever on the left handlebar hung loose as if snapped, paint had scratched off, and small dents had damaged the body work. Tristan quickly dismounted, running into the tall grass beside the rider. 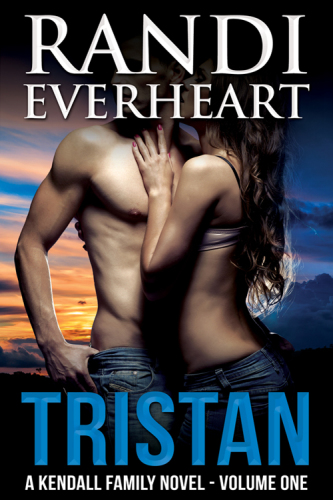 The rider turned and Tristan stopped short, his gaze riveted on the rider’s brown eyes, which reminded him of melted chocolate, long lashes framing them. A spark of anger gleamed within. Her posture was defiant. His pulse raced faster now than in the last hour. Even with her helmet still on, the visor up, her face radiated beauty, though he couldn’t see more than those eyes and cheekbones, making him desperately curious to see more. Full breasts strained at the form-fitting leather suit of red and white. Her zipper was down enough to reveal magnificent cleavage pushed up like two mountains of fleshy delights that Sugarloaf Mountain behind them could not compete with; not all of Mother Earth’s mounds were created equal.

“Are you sure? Maybe you should get checked out.”

He nodded, wondering if her bravado was covering for her being shaken up. By the look of the scene, she’d likely tumbled through the grass and that was all. They silently gazed at the Hayabusa together. “That was a nice bike.”

“Was being the operative word.”

He shrugged. “I’ve seen worse. It can be fixed.”

“Yeah,” she said, not sounding convinced.

He cringed. “Ouch. That could’ve been a lot worse. Fatal, even. Whatever move you pulled to avoid colliding was worth it.”

She cocked an eyebrow at him, her face softening. “Thanks,” she said, noting the blonde hair peeking out from the back of his helmet. He hadn’t lifted the mirror visor, which hid his face. All she could see under the helmet were a sexy neck, Adam’s apple, and stubble, besides broad shoulders on a lean frame. He wore faded blue jeans, black boots, and a blue t-shirt under a white-and-blue summer riding jacket. “You always leave your visor down?”

“Sorry. No. It broke this morning. If I get it up, I won’t be able to get it back down, and catching a bug in the face sucks.”

“You have trouble getting it up?”

He hadn’t expected the joke and laughed, exaggerating the motion of looking her up and down. “Not at the moment.” Thinking she seemed amused, he added, “Well, you’re gonna need a ride. Can I take you somewhere? Like my place?”

The look in her eyes wavered between mirth and annoyance. “Does that line work on anyone?”

“You’d be surprised,” he said. Sensing that maybe his repartee hadn’t gone over well, he added, “Sorry. Not a great time for jokes. I was just trying to lighten things up. I know a fall can scare the crap of you.”

She nodded. “Crash much? Maybe I should get a ride from someone else.”

“You might be out here a while if you want to wait. You got a phone to call someone?”

Shaking her head, she said, “Didn’t bring it.”

“Mine died earlier. Forgot to charge it at my last stop. I can run by Clarksburg Motorsports and tell them to come get you. It’s about fifteen minutes away. They’ll need to come anyway to get the bike unless you want someone else to haul it.”

She turned to him and sighed, seeming resigned. “No. I know the place. That’s where I bought it. And they service it. I don’t feel like standing here for the time they’ll take to get here. Let’s go.” She headed toward his bike and he followed through the tall grass. He lowered the rear foot pegs and got on the front seat.

He had a knack for making suggestive remarks that were technically innocent, so he said, as if unaware of the double-entendre, “I don’t usually let a woman ride my crotch rocket so soon after meeting.”

“I find that hard to believe,” she said, smiling wryly. She stepped on a peg, grabbed his shoulder, and easily lifted herself behind him, sitting down gracefully. She squeezed her legs against his, her crotch against his ass. “Take me to the strip mall in Comus. I work there.”

“Okay.” Over one shoulder, he advised, “Try to find something hard to hold onto.”

“I’m afraid to ask what you had in mind.” She put her visor back down and wrapped both arms around him from behind.

“You’re gonna want to grip harder than that,” he said, starting the engine, which came to life with a loud growl due to the aftermarket exhaust system he’d installed. When she didn’t hold tighter, he smirked and took off with a small wheelie that caused her to yelp in surprise and squeeze hard with both arms and legs, her head pressed against his back. He let the wheel down softly and noticed she didn’t lighten her grip as he continued more safely, the heat of her warming him through his back, legs, and ass.

He was no stranger to women mounting his crotch rocket, whether that was his bike or not. Those who rode one were willing to ride the other. The lone exception had been Victoria, his high school sweetheart. Her father had been killed in a motorcycle accident, making her deathly afraid of them and for Tristan once they’d fallen in love. His high-speed shenanigans had caused no end of fights. When she found out he wanted to be a pro rider, she’d freaked. He’d certainly never gotten her onto the bike, which had bothered him. If you can’t share one love of your life with the other love of your life, something’s amiss. For him, it had taken some of the steam out of their bond and ultimately made it easier for him to leave town, even though he understood her fears. He hadn’t seen her in the five years since or learned what became of her except that she’d left town, too, but he was hoping to find out something about that now that he was back, however briefly. Maybe he’d even go looking for her.

The girl currently on his bike—and he only now realized he hadn’t gotten her name—distracted him from the thought when she unzipped his jacket some and slid one hand inside. Tristan’s pulse raced, his hand inadvertently pulling on the throttle so the bike revved like his heart. Her hand caressed his chest a few times, giving him a squeeze before dropping to his belly, running over his six-pack abs slowly, as if counting the ripples under the shirt. He struggled to keep his mind on the road and half-wondered if this is how she’d crashed. Had she been riding with some other guy and made him leave the road, his body nowhere in sight among the wreckage?

The thought brought him to his senses, but not for long. Her other hand slipped down to his inner thigh, close to his growing erection, and she playfully squeezed his ass with her legs, making him wish he was facing the other way and buck naked. This woman would be the death of them both, but if he got her back to her place and got her to mount his other rocket, the sex just might be worth the risk of bodily harm now. He’d give her a lift-off worthy of a Space Shuttle launch and all the media coverage that came with.

By the time they pulled into the only strip mall in Comus, where four businesses lay in a row, with parking out front, his visor had begun to fog up. His passenger pointed at a shop that said “Pilates” above it, and he smiled to himself as they parked before it, hoping she was an instructor. Flexibility in a woman was a good thing.

Looking for an excuse to get inside, he asked, “Can I use your bathroom?”

“Sure,” she said, turning toward the door and pulling her helmet off with her back to him. A tumble of silken brown hair fell out over her leather-covered back. She unlocked the door and went in without looking at him. He followed, fumbling with his helmet strap, finally getting the whole thing off just as she turned to face him. He barely saw her face before she slapped him.

The color drained from Tristan’s face before anger brought it back in a flash. Then he got a good look at her and his mouth fell open.

Randi Everheart is an avid author of romance, due in no small part to being a diehard romantic. After all, Randi once wrote a song for the object of a crush and penned a fifty page love letter for another! The same spirit now flows into these stories – hopefully to win your heart!

Randi has a Bachelors of Music in classical guitar but has always been more of a rocker, having released several albums under another name. Tendonitis in both arms ended career plans in music, leading to a new career as a software developer. Today Randi co-owns a software consulting firm and lives in the Maryland suburbs north of D.C., is married, and loves spending time with son Ryan when not writing, playing guitar or golf, or writing smut. 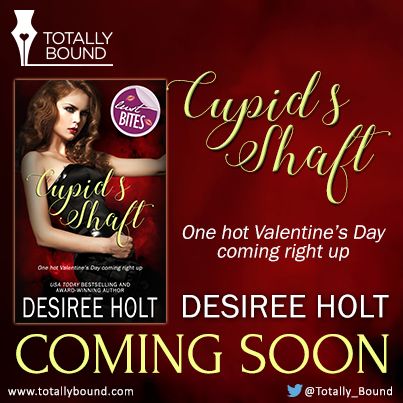