My Christmas present to all of you.

With Christmas practically right around the corner, I wanted to share a taste of my newest Christmas story. Bang the Drummer is part of a Christmas anthology, The 12 Brides of Christmas from The Wild Rose Press

Bang the Drummer is a Recommended Read from All Romance eBooks 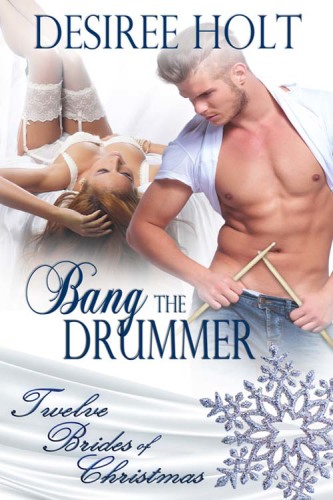 Charlie Costello lounged next to her, sock feet resting on her coffee table, his hands tapping a steady rhythm on his thighs in time to the song.

Jill tucked a strand of her shoulder-length sable-colored hair behind her ear as she studied the information on the iPad screen.

“Because look how poor my choices were in that arena, right?”

He snorted. “So this is better? Tell me how?”

Jill pulled up another memo on her iPad. “Okay. I have a list.”

She wanted to sling the iPad at him. “I’ve been that route, remember? The whole nine yards, and what did I get? A bunch of losers. No, I’m doing this like a project for work. As a systems analyst, she knew the importance of things being able to mesh on a practical basis. ”

So you’re going to interview these bozos and then—what?”