To celebrate the release of Sculptor’s Desire, Artist’s Touch (book one in the series) will be on sale for 99cents from August 25-31.

Rocco Lazzaro is on a mission to find the perfect male body to sculpt. His inability to find “the one” has affected his creativity and he’s frustrated by his failure. With a Guild charity auction coming up, he’s expected to provide high quality sculptures, but the pieces he creates feel soulless.
When Devin, a yoga instructor, approaches him and offers to help, Rocco can’t quit thinking about the red-hot ginger. Devin’s New Age beliefs push Rocco away—he can’t deal with reality, much less mysticism. No auras and rainbows for Rocco—just stone and chisel and hammer.
But Devin is persistent. He knows he’s supposed to help Rocco find his muse—and he’ll stop at nothing to show him that the line between art and skin is very thin and a true muse can provide inspiration in many ways.
This story contains hot, sexy artistic scenes of M/M interaction as our sculptor goes hands on in more ways than one. 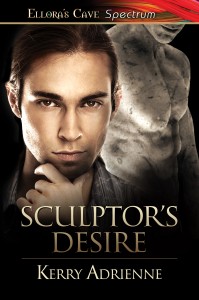 An Excerpt From: SCULPTOR’S DESIRE

Rocco clutched the purple fliers and stared out at the busy park from his seat. He’d posted enough of the papers for the day, not that it mattered. He’d never had luck distributing them before—the responses had never lived up to his expectations. He set his backpack on the ground and leaned back against the wooden bench. Why bother? Not like the perfect man was going to walk up, pick up the flier and actually respond. Not in this lifetime.

He lowered the sunglasses over his eyes. The late afternoon sunlight didn’t thread through the full-summer trees in this part of Central Park, but his shades allowed him to “bulge watch” as the throngs of tourists and New Yorkers paid homage at the mosaic shrine to John Lennon. The circular black and white medallion with “Imagine” scripted across its center was a place of reverence. Disciples had outlined the medallion with a peace sign made of fresh-cut flowers, and tourists took turns posing and taking pictures in front of the makeshift altar.

Rocco scanned the visitors. The place was a people-watcher’s dream, and for a Monday, the crowd was huge. Summer in the city always brought the tourists in droves of asinine clothing and hats and noise. Still, he had hope he’d find the one he was looking for.

He set the fliers on the bench beside him, then picked up one purple sheet and folded it into a fan, carefully creasing each fold. He tried to breathe out the hot air, but no doubt about it, the June day was steaming. New York was a sweltering change from the Adirondack cabin where he’d spent most of his time in the last month. Still, he was happy to be back in the city—his second home. The cabin was great as a quiet place to work, even though it was small, but its remoteness made it impossible to people-watch and gain inspiration.

Rocco crimped the last crease. His apartment in one of the Guild’s brownstones felt like home away from home. The Guild’s large studio provided the best space he’d ever had to work—tons of light and plenty of quiet. And his guildmates were like brothers, always ready to support each other through any artistic struggle, though he supposed they too were growing tired of his search for a perfect man. No one had actually voiced it, but he felt a distinct difference in the tone of the conversation when he brought the search up in conversation. With the upcoming charity auction in October, most of the artists would be working overtime and even less inclined to listen to his plight.

He fanned himself with the folded flier. Nothing to see at the moment. Not a single possibility in the groups of people gathered in the small courtyard. He scanned the area. The top edge of the Dakota Apartments peeked over the trees and Rocco glanced over the rows of tightly curtained windows. He’d never been inside the lavish building, though he knew several Guild members had been to private parties there. Rocco had been invited many times but had always declined. Wealth and showmanship weren’t his thing. He preferred the simple life where nature set the style, not John Varvatos and Marc Jacobs.

Strawberry Fields was a prime tourist spot. Too bad today’s mob held few specimens worthy of a glance, much less a stare. I’d think the simple math odds would warrant at least a couple prospects. Add in summer shorts, and there should be at least a good bulge or two…

He glanced at the stack of fliers—about fifty of them left. He’d put up as many papers as he could around the park over the last hour. Who was he kidding? After years of searching, he might as well give up on finding the ideal male. He set the fan on the bench and shoved the stack of fliers into the front pocket of his backpack and zipped it up.

He’d held several open calls with no luck. Something inside him pushed him to keep looking, keep trying, no matter how many times he failed. The same something kept him awake at night and tore apart his thoughts during the day. He’d find what he was looking for and he wouldn’t stop until he did, no matter what it took. It didn’t matter if it cost him his friends, his guildmates, his sanity. That was art, wasn’t it?

The soft, lilting voice wove through Rocco’s thoughts and he paused. He looked up and his breath caught in his throat when he saw where the voice originated. Broad shoulders and a flat abdomen encased in a perfectly tight white T-shirt. Tall, but not overly so. Blue jean shorts, snug. Red cropped hair that glistened gold at the tips and fell over in a lock of bangs. Rocco gazed from top to bottom and licked his dry lips.

Red, white, blue, and all American.

“Sure.” Rocco fumbled with his pack and slid over to make room on the wooden park bench, pushing his folded fan behind him and out of the way so the stranger could sit down.

“Thanks,” the man said, dropping onto the bench.

No, thank you. But not so close. The vibrations of the man sitting raced through the wood of the bench into wood between Rocco’s legs. He swallowed hard, pushing back the anxiety. “No problem,” he said, half-whispering. He peeked then gazed down again. Finally, someone worth looking at. Only the man was so freaking near, Rocco felt as if he could feel the heat emanating from the man’s hotness.

Too close. No comfort.

The man scooted back on the bench and stretched out his legs. “Long day. I’m exhausted. Didn’t expect there to still be such a crowd here this time of day.” He blew out a long breath and closed his eyes.

Despite the heat, a shiver raced through Rocco and he eyed the fluid line of the man’s form. If he’d had a sketchpad, he’d do a quick gesture drawing of the long stroke of torso and limbs.

Not knowing what to say, Rocco turned away. A group of noisy teens descended on the mosaic like a swarm of bees, laughing and shouting and taking photos of themselves in stupid poses. Rocco blinked away the distraction and looked back to the man sitting beside him.

Not bad. “Yeah.” Hell, not bad at all. “It’s crowded.” He squeezed his thighs together to control his body’s reaction. Why couldn’t the man have chosen to sit on the other side of the path where Rocco could observe without having to talk?

“Such a loud crowd, at that.” The man opened his eyes and peered at the teen spectacle then shook his head. “They need to relax. Chill. You’d think they’d never been outside before.”

Rocco nodded and followed his gaze. A teen had picked up one of the flowers from the medallion and was tossing it into the air and catching it. “Tourists. New York can’t live with them, or without them.”

“Tourist?” The man asked. “Aren’t you? I can’t place that accent, so I assumed you were. Where are you from?”

“Italy.” Rocco sat up straight, trying to not be obvious in staring at the man’s muscular legs. He must be some kind of athlete. Was this man a candidate or had the hour of staring at subpar specimens clouded Rocco’s judgment? “Well, born in Italy, but I’ve lived in the city for several years. Many, actually. I consider myself a New Yorker now.”

“Ah, so Italian with some city dialect. Not a tourist. What’s your name?”

Rocco flipped his sunglasses up onto his head. “Rocco Lazzaro. Not a tourist.” He forced a smile. Meeting new people in person wasn’t something he was used to doing.

“But very Italian, I see. Nice to meet you, Rocco.” The man held his hand out. “I’m Devin Johansson. Also not a tourist. I live on the East Side.”

Rocco took Devin’s hand in his own and shook it firmly, aware that his own hand was clammy with anxiety. “Good to meet you too, Devin.”

Devin clamped down on Rocco’s fingers and held on. “Oh. You have working hands,” he whispered. He pulled Rocco’s hand closer and rubbed Rocco’s palm with long, soft fingers. “And your aura shows great creativity.” He looked up. “What is it you do?”

The teens moved on down the park path, giggling and talking loudly as they went. Rocco glanced over at them, trying to still the shudder that played along his arm as Devin rubbed his hand. A calm, warm feeling flowed up through his arm and into his chest. Even in the summer heat, the warmth felt good. Too good. Wait, what did he say? What the hell?

“My what? My aura?” Rocco yanked his hand away, immediately aware of the loss of warmth. Great. The first good-looking guy he’d met this week was a fruit loop New-Ager.

Sign up for my no-spam newsletter by the end of August to be entered to win a $50 Amazon gift card: Blog/newsletter form

Kerry writes about love in its many forms, and enjoys exploring the dynamics of relationships and the quandaries people get themselves into. She lives in suburbia, but is making plans to escape to the ocean and NYC, as both places hold a piece of her heart.

You can connect with Kerry here:

You can purchase Sculptor’s Desire here: