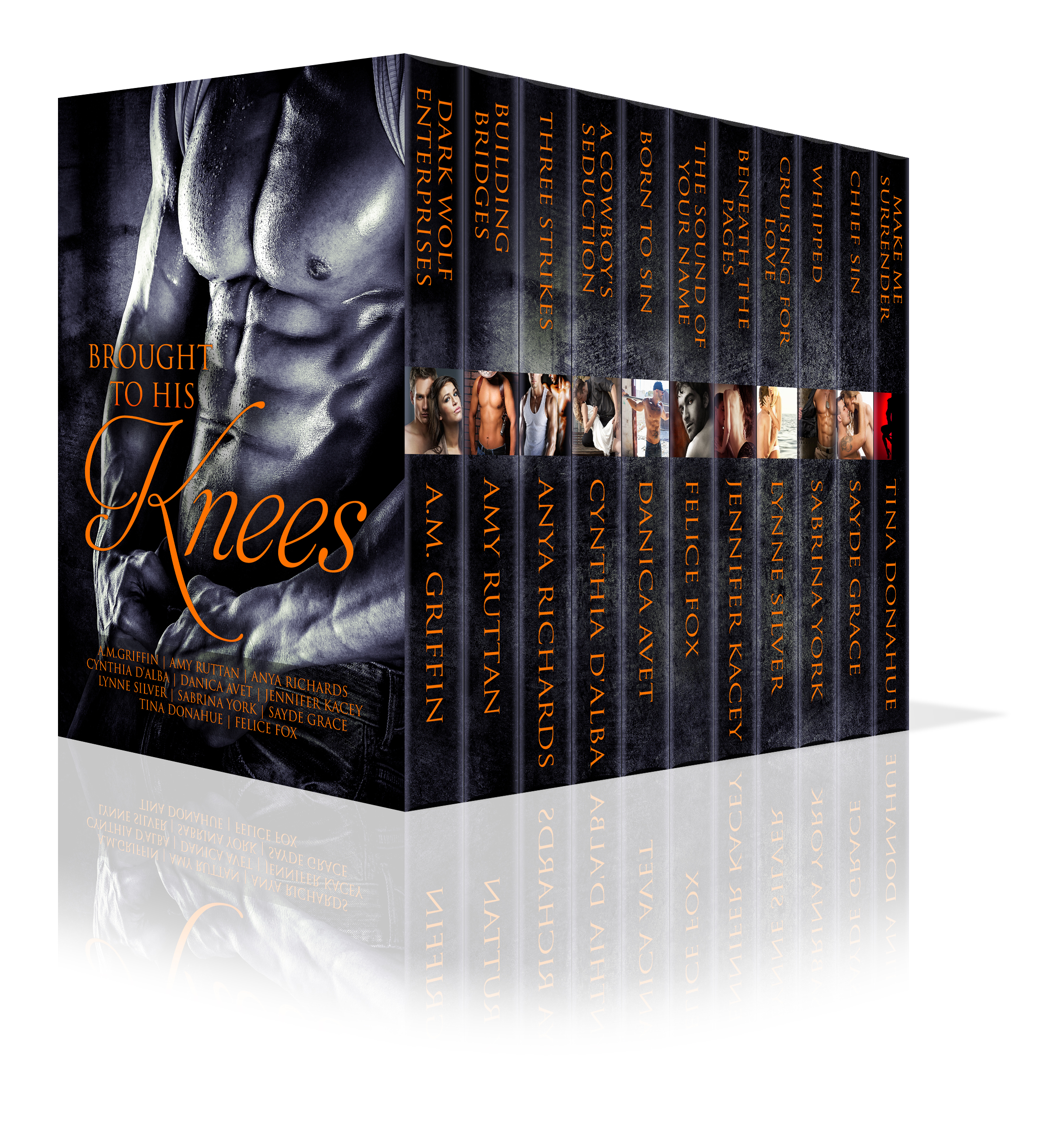 Who Doesn’t Want a Man Brought to His Knees by Love? Eleven Scorching Stories for 99¢

I was thrilled when my latest venture, the Hot Alpha SEALs Megaset, hit the New York Times and USA Today Bestseller lists and I am very excited about my next release, a collection of steamy stories about men brought to their knees by love. Check out a taste of my story, and read on for more teasers from the collection.

Brought to his Knees Box Set 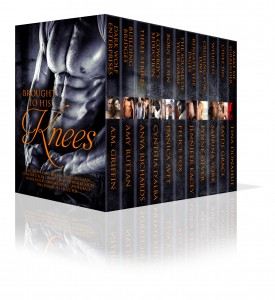 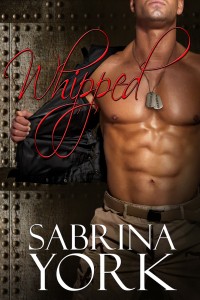 Dane swears he will never suffer the same fate. But when he meets a woman who can take all his dominant loving and beg for more, he realizes he may have met his match. It’s a damn shame she’s the one woman in the world his man-code deems untouchable…his best friend’s sister.

Read an Excerpt (18+ Only, Please—this is steamy stuff)

He was bigger than he’d been in high school. Bigger, taller and just…more. His muscles, lacquered by a tight black tee shirt, bulged. Tattoos danced over his biceps. The planes of his face were angled. High cheekbones, dark brows, long blade of a nose all the same, but sharper. His eyes hadn’t had those shadows back then either, that predatory glint. His hair—his thick mop of curls—was gone, shaved off, revealing the perfect shape of his head. His chin, however, wasn’t shaved. It was covered by a smattering of dark fuzz. A scar on his cheek, rather than detracting from his looks, made him even more fascinating, dangerous.

And he smelled…delicious. As he moved, his cologne, a clean enticing scent, enveloped her in a cloud.

Oh, he was dangerous all right.

The slight buzz from the margaritas at the bachelorette party, the sexual sizzle ignited by the strippers who’d burst in on their party wearing camo fatigues with rip-away crotches, all contributed to her bravado.

In real life she would never hook arms with some random guy and sashay by his side to his room. But hell. This was Dane. The man of her fantasies. And, judging from the hunger in his expression as he looked down at her, the heat that passed between them where they touched, he wanted her.

Thank God she wasn’t still the dorky teen with braces she’d been when they’d last met.

She looked amazing tonight. He happened to wander by and notice her. No one else was around. And he wanted her.

It was as though, somehow, magically, all the stars had aligned.

There was no way—no way—she would miss this opportunity.

Excitement danced low in her gut as he swiped his room key and led her into his suite. It was a nice suite—not as sumptuous as Angie’s, but nice all the same—with a small sitting area and an enormous king bed. The windows looked out on the sparkling lights of the City that Never Slept. Or one of them.

She tipped her head to the side and blew a bubble with her gum. “Margarita?”

He waved at the glossy wood armoire against the wall. “I have a mini bar. It’ll have to be shots. What’s your poison?”

“Tequila then.” Might as well keep a good thing going.

He hunkered down and searched through the fridge, pulling out a tiny bottle of tequila for her and whiskey for him. He cracked them open and dumped them unceremoniously into two glasses and handed her hers. No ice or anything.

Good thing it didn’t matter to her, or she’d be pissed at his cavalier attitude. The drink was lubricant, a time filler. They were dancing around a seduction, and they both knew it.

Apparently seduction was not necessary. Because Dane took a swig of his drink and said, with no preface whatsoever, “So do you have any no-nos?”

“Anything you won’t do? Because I’ll be frank. I like a little kink.”

First of all, the heat scorching her was mind-numbing. Literally. Mind. Numbing. Those brash words from Dane’s gorgeous lips and she nearly lost her balance.

So, in fact, did she. Nothing super dark, but a little slap and tickle for sure.

“Um…” She took a sip of her drink. She shuddered as the harsh bite of liquor burned through her. It clashed with the flavor of her gum. “What kind of kink are we talking about?”

He strode to his suitcase and fished around, pulling out a long leather strap with two loops on the ends. Her eyes fixated on it. She shuddered.

“I want to tie you up,” he said, his voice low, taunting, as though he expected her to squeak like a mouse and scuttle from the room.

Also good. She tried not to flinch in anticipation. His hand on her ass? Gawd.

“I won’t hurt you, though. I’m not into that. And of course, I’ll use protection.” He held up a pack of condoms.

“Billy said your fee’s been paid.” His brow quirked.

The smile froze on Tina’s face. A combination of horror and rage and something else altogether snarled through her, as she realized how right she’d been. Not only did he not recognize her—after knowing her her entire life, for pity sake—he thought she was a hooker.

Granted, she did kind of look like a hooker, with makeup plastered on as if with a trowel. But still…

She glanced at him from beneath the impossibly long lashes The Master had glued to her lids. Not her style, but she liked the way they looked. The way they made her feel…like someone else. Someone sultry and daring. Someone Dane would want.

To tie up and spank.

Aside from that, the temptation to have him, taste him, fuck him, ran rampant in her. For years she’d fantasized about her older brother’s best friend. All through puberty and long after that. Every man she’d met, dated or been with had been gauged against Dane Coulter. None of them had measured up.

Ah yes, the temptation to have him was overwhelming.

Not to mention how much fun it would be watching him shit a brick tomorrow, when he realized who she really was.

Too delicious to pass up, really. The whole package.

He stood there in the middle of the room, holding the strap in one hand and the condoms in the other, waiting for her reply. Though he was all Dom, she couldn’t help but notice a hint of tension in him, as though he was, on some level, afraid she’d say no and waltz away.

He wanted her. And he wanted her bad. It was the heat in his eyes that gave him away, the way they flicked over her and burned with hunger. Yeah. Irresistible.

Sure. She could be a hooker for the evening.

What people are saying about WHIPPED:

“5 Stars—Whipped by Sabrina York was so good, LOVED all the sexy scenes and then how she mixed in some humor parts. I know she’s super busy but I’m really hoping she makes this one into a series because its that good :)”—Read More Romance

“5 Stars—Oh my goodness! I loved, loved, loved this story! The sex was off-the-charts hot! And I mean HOT! The characters were witty and so entertaining. As always, Ms. York’s humor and witty writing is on full display. I honestly don’t think she could not write a story that doesn’t leave me in awe of her slightly sarcastic, yet always smartly written style. I bow to the master.”— Coffee and Books

“5 Stars—This was a great read that kept me glued to the events. Loved the epilogue!”—Ms Romantic Reads

Oh and here is some inspiration for Dane & his buddies:  http://www.pinterest.com/sabrinayork/boys-in-uniformor-not/

BROUGHT TO HIS KNEES—Available August 19th

Amazon: Check Sabrina’s Amazon Page for this and all her releases: http://www.amazon.com/Sabrina-York/e/B00856PDEO

More about Brought To His Knees

Dark Wolf Enterprises by A.M. Griffin: Murder, mayhem and imprinting with a hot wolf shifter… And they say being an accountant is boring.

Building Bridges by Amy Ruttan: A vet tech and a lone wolf rancher ride out a sudden storm, but can they weather the emotions they stir up in each other…

Three Strikes by Anya Richards: Two lonely men. One secret affair. Irresistible passion that will push them both to the breaking point, and beyond.

A Cowboy’s Seduction by Cynthia D’Alba: One exhausted cowboy + One uptight account x A tropical resort = A hot seduction. But who is seducing whom?

Born to Sin by Danica Avet: A tomboy in love makes a desperate attempt to seduce her best friend and succeeds beyond her wildest dreams. But this Alpha male isn’t easily tamed and has secrets that could very well tear them apart.

Beneath the Pages by Jennifer Kacey: One wicked night with her did nothing but whet his appetite. Now he’ll settle for nothing less than her complete submission.

Whipped by Sabrina York: A scalding attraction. An irresistible passion. A pity she’s the one woman he can never have…

Chief Sin by Sayde Grace: A taste of Sin isn’t enough. Instead she wants all of him, including the heart she once broke.

Make Me Surrender by Tina Donahue: When it comes to two of the hottest guys in town, she has a proposition…to win their attention, passion, hearts.

Check out my Pintrest boards (prepare to spend the day): http://www.pinterest.com/sabrinayork/boards/ 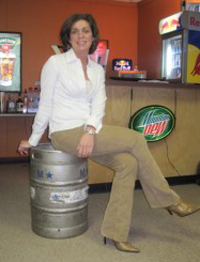 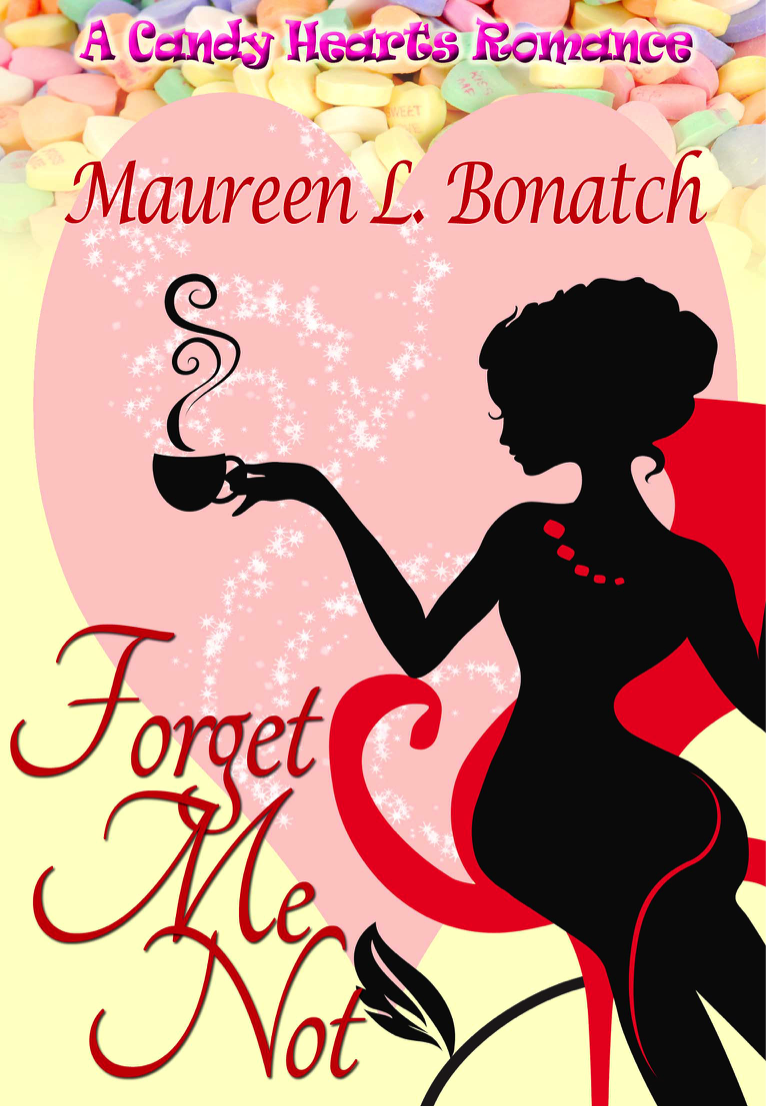