Comment for a chance to win a $10 Gift Certificate

People say that writing is a solitary occupation and to a great extent it is. I mean, no one can do the writing for you, nor would you want them to. But it also takes a lot of research, especially for me. I am known as Miss Picky because I go to great lengths to get things right.

When I was writing Finding Julia, there were some specific scenes in the story that I needed details on. For example, there’s a cabin in the woods in Massachusetts. I had to know if there was still open land outside Boston, where it was, how much open space, all that good stuff. I managed to find a real estate agent who was willing to take time out of her busy day to answer my questions, although I think she was secretly hoping I was actually looking for property to buy.

There is also a scene at a restaurant called Harry’s House. Now this is of course a fictional place but it’s based on a real restaurant, Little Harry’s, a French colonial structure in Detroit with a lot of ambience. I lived in that city fir twenty-five years and Little Harry’s was a place where Detroit’s gentrified elite as well as their Mafia elite frequently dined. Media were strictly prohibited so it was a place where people could be assured of privacy, especially with the restaurant divided into small rooms.

Unfortunately it no longer exists. Singer Anita Baker bought it and planned to turn it into a recording studio. She ran into so much resistance she built an IHop instead. Kind of like when my late husband and I went to Texarkana to see some of the historic landmarks of his ancestors and at one spot found a Taco Bell.

FINDING JULIA is now available for preorder. I hope you will sign up for your copy.

Can a moment of passion outlast years of secrets and misery? 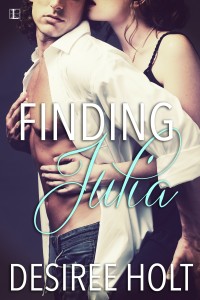 “Let’s hope,” he muttered. “All right. Be sure to let me know how things are. I’ll be worried about you. Here. Give me your cell phone.”

She pulled it out of her purse and handed it to him. He punched some numbers and gave it back to her.

“There. My private number’s in there. I’m speed dial number one. I’ll have my phone on all the time. Call me whenever.”

“Oh, Luke.” Her voice broke and she dug deep to get control of herself. “Why couldn’t we have met fifteen years ago?”

“I don’t think we would have been ready for each other then.” He kissed her one last time, then enfolded her in his arms. “Just remember. No matter what happens in your life, you will always be mine.”

“Yes, I will.” She was fighting tears and clinging to him as if she’d never let him go before taking a step back. “Goodbye, Luke.” And then she couldn’t help herself. “I love you.” She yanked up the handle of her suitcase and nearly ran into the terminal, dragging the luggage behind her.

Julia went through check-in and security as if in a fog. She bought herself another cup of tea and sat in the waiting area, sipping at the hot liquid, hoping it would ease the sudden chill invading her. The man sitting next to her was kind enough to nudge her when the call for boarding came. She entered the plane and took her seat like a robot, buckled in and leaned her head back.

Images flashed through her mind: she and Luke dancing, bodies moving slowly to the music, their first night together, the wonder of exploring each other’s bodies, the night in the cabin, warmed by the flames of the fire, their kiss at the airport, more poignant than sensual.

What a mess. The damn divorce papers still unsigned and now she had no idea when or how they would be. Luke had said he would wait but for how long? And how would the twins handle this? Their relationship with their father left a lot to be desired yet surely this would affect them emotionally. Her life was slowly being flushed down the toilet and she was left with a very inadequate plunger. Tears begin to trickle from the corners of her eyes, and her stomach knotted.

“Excuse me.” The flight attendant was leaning towards her, over the empty seat next to her. “Forgive me for asking but is something wrong?”

“No.” Julia sniffled, then tried on a smile. “Just fighting a cold is all.”

“Can I get you anything?” The attendant was obviously concerned.

“Some hot tea would be nice, if you could. And thank you.” Maybe she could drown herself in an ocean of the stuff.

She realized as she sipped the hot liquid, she would now always associate it with Luke. She hoped she would still be able to drink it without crying. The tea seemed to settle her still-jumbled stomach enough so she could relax a little, but it did nothing to rid her of the feeling of despair creeping over her.