BIND ME CLOSE in Bravado…a tiny Texas town where the men are good and plenty!

BIND ME CLOSE, Book 3 in KNIGHTS IN BLACK LEATHER series by Cerise DeLand!

Bravado Texas, where the men are good and plenty and the women wear only a smile!

Cowboys, ranchers and sheriffs. Need one? I got a sheriff for you. Wade Saxon of Bravado…on the hunt for a jewel thief and car thief with a nice little lady along for the ride!

The scene: Sheriff Wade Saxon of Bravado County has just picked up Willow Turner whose car was stolen outside town by a jewel thief. As Wade chases the culprit, Willow and he get to know each other very well.

Hint: Willow has come to town to research the Turner-MacRae family history. She is a descendant of Fancy Turner and Bull Elk, Chief of the Comanche tribe in my prequel to the contemporaries STEAL ME AWAY. 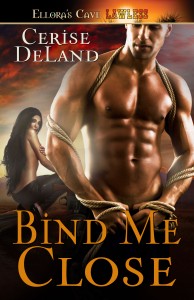 Streaking past them going in the opposite direction was a white flash. Willow gasped. Certainly that was her car.

Saxon did a hand-over-hand circle of the steering wheel.

Willow grabbed at the dashboard and caught no traction. Jesus.

They fishtailed, then off they zoomed. Right on the tail of her hijacked Honda. Then, as if the thief had put wings on her car, it sped ahead and disappeared over a hill.

The crash they heard was mind-jarring.

Saxon rammed on the brakes. “Grab the roof handle!” he yelled at her as they crested a hill.

As they cleared the rise, Willow spotted her car to one side.

Tumbling over and sliding, it crumpled like an old tin can. It teetered on its passenger side, slammed into a tree, the roof crushed. Smoke rose from the wreckage.

Saxon screeched his truck to a stop, tail-spinning in the rocky soil. He put a hand to hers and crushed it tight. “Stay here!”

As he ran toward the Honda, he yelled into his dispatch radio and Willow could imagine what he said. Come. Get an ambulance. Where’s Harris?

Willow just sat where she was and shook. The adrenalin rushing through her was the wildest blast she’d experienced in years.

By his dashboard clock, Willow knew she waited for the wreck to clear for over three hours. Rapt, she just watched Saxon and his team of emergency responders as they tried to ply the driver from the front seat of her car with the ugly jaws of life. Firemen came, too, in two different trucks to put out a blaze that began in the engine. Willow watched there, knowing her suitcase and her laptop were either burnt or water-logged. She counted her blessings. She really did, happy the thief had stolen only her car and hadn’t tried to take it with her in it. But she was at a loss what to do without transportation, clothing or her security blanket, also known as her laptop.

Drained like an old dish cloth after so many wild minutes of the chase, she soon stopped cursing in self-pity. She watched Sheriff Saxon talk on his cell to god knew who. Finally, he returned to his truck and climbed in beside her. Tossing his Stetson to the rear seat, he smoothed his unruly hair, then reached for her hands and held tight.

“I know this is quite a blow to you.”

“Sorry it took so long.”

“No, no. I’m grateful he got some help. He looked alive when they put him in the ambulance. Is he?”

I am too. Tears scalded her eyes.

“Hey,” he said so softly that she was shocked a man with so much timbre in his voice could speak so low. “Cry if you have to, but please don’t worry.”

“Worry?” she blurted, sad and appalled and angry. She felt like a serrated knife was sawing at her insides. “I’m…just so…stunned! I’ve got no car and no clothes and— Oh, hell. I never blubber.”

But she did. Her eyes shed crocodile tears. Her nose ran. Her lips quivered.

And he slid over to her and wrapped her so close in those big bulging biceps that she wilted like a picked flower in the mid-day sun.

He dug a handkerchief from his pocket and put it to her nose. “Blow.”

She honked right into it and sniveled her thanks. Male comfort was such a rare benefit for any of her troubles, that she wound her arms around his torso and loved the feel of his rock hard abs. She wondered how to stay here in his arms. Keep crying? Jump his bones? Worry about a Mrs. Sheriff Saxon?

Hell, how could she think of such things after she had just lost everything?

He cuddled her closer and ran his hands over her hair. “It’s been a long day.”

“Crazy,” she agreed, roping in her wild emotions and pushing away to reclaim her dignity.

“Look at me.” He caught her chin between two fingers and made her glance up at him. And god, he was the most fabulous male creature she had seen since she’d watched Bradley Cooper get a hangover in Bangkok. But this man was not on a silver screen. He breathed. He grinned. He filled her view. Broad shoulders, sun-bleached hair, sea green eyes that caressed and consoled. “I’m gonna fix you up, best I can. I just talked with Cara MacRae and Samantha Turner. Told them what happened to you.”

“Oh. That’s so good of you. Thank you. They were expecting me tonight.”

“And they still are.”

“How? I have nothing! No clothes even. Look at me, Sheriff.”

His gaze flicked over her, but it was no cursory exam. It was long, lingering and appreciative. Her breasts beaded. Her pussy pulsed. Her panties got wet. And every nerve in her body sang a halleluya chorus. When he caught her gaze, he said, “My name is Wade and you are going tonight.”

Why? Will you be there? How can I care if you are? What the hell is wrong with my logic meter? She ran a hand over her hair. “Sorry. Stolen cars and high speed chases and fires are not part of my usual day.” “Believe me. I can’t go.”

“You will. Cara and Samantha are seeing to it you have clothes. Cara owns a women’s shop in town and—”

“Not from where I sit.” His extraordinary colored eyes danced over her once more.

If he didn’t stop that, she’d leave a wet spot on his fine leather seat from her soaked panties. Jazzed by his sexy looks and his sweetness, she had to be logical. “I am not your average—“

“Size four?” He arched a wicked brow. “No, thank god, you definitely are not.”

She stared straight ahead. “I will not ask you how you can estimate that.”

He smacked his lips. “Hips, 40. The rest of you, all nice and tight in all the right places.”

Wow, he was such a player, but was she complaining? Only, if he has a wife.

Two men, both Hot and Dangerous