Desiree's Place > General > Get On! a hot tasty treat by Regina Cole

A word from the hostess: I bought this book the day it came out and read it at once. It totally rocks. Regina cole did a great job with the story, the hero and the heroine. this is a Don’t Miss read.

Only Mia Bartholomew could attend a body mod convention and end up at an illegal street race, running from the boys in blue. So what’s a hot-blooded Latina piercer to do? Jump on the first motorcycle out of there, that’s what. She’s got a career to think about, after all.

Of course, that motorcycle would have to belong to a crazy-cute ex-cop with a broken heart and a burning vendetta. Garrett Long’s former girlfriend was a casualty of his last case. He won’t rest until he punishes her murderer, a drug-running trust-fund kid with the DA in his pocket.

Garrett and Mia try to go their separate ways, but their animalistic attraction simply won’t fade. And the sex? Best. Ever. Though their fiery passion really couldn’t have picked a worse time to flare—Garrett’s target is upping his game, leaving him with a choice. Die for revenge? Or live for Mia? 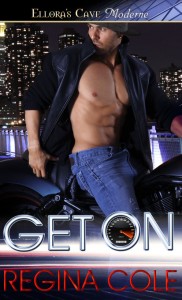 She reached for him, then hesitated. “Really? Who are you?”

“I’m your ride out of here. Get on, the cops are coming.”

She glanced to her right, where the sirens were screaming louder than ever. He could even see the blue lights reflected in her eyes—a deep green, at his best guess in the flashing light. Her fists tightened at her sides, and when she took a deep breath, he was impressed with his fortitude, not even glancing at the way her cleavage swelled at the top of her burgundy neckline. Well, not glancing long, anyway.

“I hope I don’t regret this,” she said as she grabbed his hand.

He steadied her as she climbed onto the bike behind him. Her thighs gripped his and her hands locked around his midsection. He tensed his abdominal muscles and revved the bike’s engine. “Hold on tight.”

He kicked the bike into motion and they joined the flow of traffic. Garrett smiled at the feel of wind on his face and the feel of hot woman behind him. He was almost sorry he couldn’t see her now, that wild hair streaming behind them like a living flag. Her face was plastered against his back, and her thighs were clamped so hard against his that he couldn’t help but imagine what it’d be like to have her beneath him.

Maybe later, he thought with an evil grin, swerving into a gap between two cars, a gap almost too small for his bike. For now, they had to get the hell out of there without being arrested.

They tore off into the night, driving much too fast. Exactly how Garrett liked it.

When she’s not frantically pounding away at the keyboard, she can be found fishing with her family, playing with her dogs, trying out strange new recipes, or snuggling with her hubby.

Find Regina all over the web! It’s like a treasure hunt, only with less pirates.