Huge welcome to the very talented Cassandra Carr and her hot new series.

The Payment series (Prized, Possessed, Purgatory)- Catrina Carter is in over her head. Way over her head. She’s in debt and, short of bankruptcy, which wouldn’t happen fast enough to pay the creditors nipping at her heels, Catrina has few choices. Eviction is coming any day, and even though she traded in her great car for a “more affordable” model, it’s about to be repossessed too. Catrina goes to Debt Management Associates, or DMA, for help.

The cost for DMA’s help is something she never thought she could pay, but out of options, Catrina agrees to serve a man who pays her debt in full, and begins training in how to please him. Jared. Her new benefactor. He is tasked with helping Catrina get her life back on track, in addition to taking his pleasure with her and ordering her to oblige friends, colleagues, and even total strangers sexually on his whim.

When Catrina leaves the DMA program after her one year term of service, will she be able to keep the lessons Jared literally spanked into her topmost in her mind, or will old habits rear their designer heads? 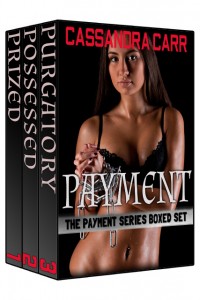 Could she do this? The words “no way out” boomeranged around in her head.

Raoul pulled a sheaf of papers from the folder. “This is our contract. It’s been tailored to you and your particular situation. Read it. I’ll be back in a little while.” He stood, handed her the contract, and then left.

Sweat trickled down the back of Catrina’s neck, though it wasn’t warm in the room. She turned her attention to the contract. Again, so innocuous-looking. Her stomach churned. Things didn’t get better as she read.

After a short time, Raoul returned and resumed his seat behind the massive mahogany desk. “Did you read the entire contract?”

“Did you understand everything?”

“You learn quickly. The benefactors will like that. It’ll help you on auction day.”

He motioned for the contract. “We’ll go over everything before you sign it.”

Catrina handed it over and Raoul turned his attention to it. “You understand exactly what ‘servicing your benefactor’ means?” Her face heated and she started to look at the floor again. “Eyes on me,” he snapped. “You understand that your body would not be your own? That your benefactor will have essentially purchased the right to use you as he sees fit?”

“With your amount of debt, as I said, things won’t be easy for you. As part of your agreement with your benefactor, you would be expected to not only service his needs, but those of anyone else he commands. Anyone.” He tilted his head. “Again, I’m going to be blunt. We want no misunderstandings. Your benefactor will have the choice to fuck any hole he wants, whenever and wherever he wants to. That, of course, means in private or in public, barring anything that could get the both of you arrested.”

Wouldn’t want that. God, how embarrassing would that be? Catrina sighed. Probably not as bad as other things that’ll happen to you.

Raoul continued. “And he can share you with his friends, colleagues, and even total strangers—any part of you—as he desires. And just so you know, at this debt level, he probably will. The milder benefactors generally don’t reach the level where they’re willing to deal with someone like you.” Raoul folded his meaty arms over his chest.

Catrina pressed a hand to her stomach. This wasn’t happening. A voice inside her head mocked her. Yes, it is, because you couldn’t control your spending. You had to have it all.

“Your benefactor, at the time he purchases you, will pay the entire sum of your debt to us and we, in turn, will pay your creditors so the debt doesn’t get worse while you serve your term. If you do not finish your term you’ll be responsible for paying your benefactor back. We will also arrange for the delivery of your furniture and other personal items to a storage locker for a year. At the end of your term, we’ll assist you in finding an apartment and getting everything moved back in, as well as obtaining new employment, as you’ll begin training immediately and will need to quit your current position. Do you understand?”

“Good. Now we need to go over a few things as far as your experience goes.”

“Oh,” she pretty much squeaked out.

“Again, I’m going to be blunt. Have you sucked cock before?”

“It doesn’t matter if you’ve had vaginal sex because that’s off the table. No benefactor wants to get a girl pregnant, especially not one with problems similar to yours. Most of them would never chance it even with appropriate protection.”

“Geez, I get it.” Catrina huffed and Raoul frowned. “Sorry, sir.”

Catrina was pretty sure she didn’t want to know the reasoning behind that. Raoul moved on.

“Have you been spanked before, either as a child or an adult?”

“Huh. All right then. You need to be aware that nearly all the benefactors, particularly at your level, use spanking and other punishments to correct and form your behavior.”

Catrina was about to self-combust. Other punishments? What the hell does that mean?

“You’ll have tests done today to make sure you’re clean. All benefactors have them as well, and both yours and theirs will be repeated once a month during your term. Do you have any questions so far?”

“No. Sir.” She felt ridiculous repeating “sir” all the time, but it seemed like the thing to do at that moment.

“Good. Do you need to read the contract again?”

“Are you absolutely sure you understand what you’re agreeing to?”

“Yes.” After a few moments of studying her face, during which time Catrina had to fight to keep her eyes up, he nodded and pushed the contract back across the desk.

With a trembling hand, Catrina picked up the pen he offered and, at his instruction, initialed each page and then signed the last one. He then added his signature.

“I’m going to take this to Processing and get your tests and medical examination set up and then we’ll talk about your training.” Raoul left the room again and Catrina seriously considered running. Yes, they had her personal information, but since she was probably close to being evicted anyway, there’d most likely be no way to find her. But deep down she knew she could run, but she couldn’t hide. Unless she could create an entirely new identity, like they did in the movies, her debt would find her.

Raoul returned to the room and sat on the couch. She remained perched on the edge of the guest chair. “You’ll be known as number nine throughout your training and possibly into your service if your benefactor wishes it.” She tried not to make a face at that. How much more demeaning could this whole thing get? “Shall we get started?”

“Was that a question?”

“Here’s the first part of your training. You were instructed to wear a skirt today. I see you complied with that instruction, and that’s good. If you hadn’t you’d be in trouble right from the get-go and would’ve lost the privilege of wearing clothes entirely.” Catrina blanched. “I want you to come over here and place yourself over my lap, facedown, with your feet on the floor and your upper body on the couch next to me.”

“I’m going to start your training immediately with a spanking.” He sounded so matter-of-fact about blistering her ass, Catrina began to shrink back. “If I have to come over there and get you I’ll take off my belt. Show me you can be a good girl and accept the consequences of your irresponsibility.”

Oh, God. No, no, no. The thought of being spanked with a belt was terrible. Catrina willed her feet to move. Slowly, she rose, shuffled over to the couch and then awkwardly lowered herself over the lap of a man she’d met not an hour ago so he could spank her. Things got even worse when he ordered her to lift her hips and then proceeded to push her skirt well up, leaving it bunched around her waist. But the final humiliation came when he slipped his fingers into the waistband of her panties and briskly tugged them to her knees. Her eyes closed in mortification.

She thinks the best part of being a writer is penning stories about love and sex while most others struggle with commutes, micro-managing bosses and cranky co-workers.