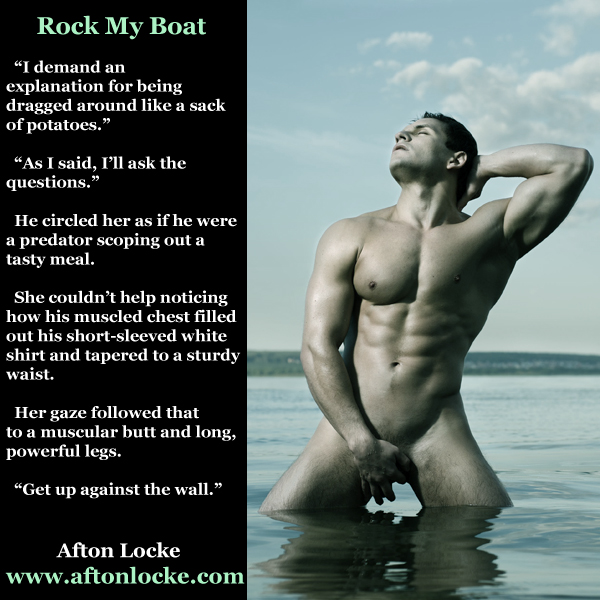 Once addicted to the sea, you can’t escape its pleasures. 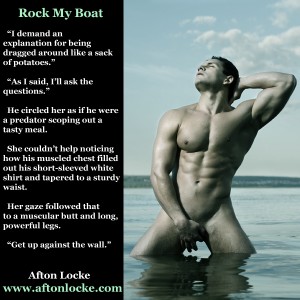 Workaholic CEO Rhonda Simms embarks on a Caribbean cruise to create an ad campaign for a big maritime freight client. She finds it impossible to concentrate, however, when Simon Mann, a blue marlin shifter, sets his sights on her. From a private, hands-on safety briefing to a wild ride in the ocean, he rocks her ordered world.

Simon drowned years ago in a shipwreck caused by Rhonda’s client, and he’ll do anything to be a normal man again. As his mate, Rhonda is the only person who can help him.

Tired of being so responsible, Rhonda is ready to let loose with a shipboard fling. Mating with Simon could cost a lot more than her virginity, however. Will she stick to her present course or will she let this sexy alpha rock her boat?

“You’re strong,” he said, “but keep your reflexes ready at all times.”

As if to prove his point, he snaked an arm around her waist and yanked her backward. The movement was so sudden, she fell against his chest.

“That was a big sea wave, Ms. Simms, and you weren’t ready.” His stern voice, laced with mocking, scraped her nipples and hardened them.

While she scrambled to get her footing, her lower back accidentally brushed against his crotch. The crisp white fabric of his trousers hid an erection as hard as a pier piling! The swollen lips of her cunt parted inside her panties. Why hadn’t she ever made the time to find the right man and go to bed with him? She must be the world’s only thirty-year-old virgin. Every ounce of her energy had gone into her career.

Her skin blazed under the waistband of her shorts. She needed to be between the hard wall and his equally hard body.

What was going on here? She might be a cruise newbie, but this couldn’t be part of the standard safety procedure. As the CEO of her own company, Simms Creative Advertising Agency, she was well versed in sexual harassment policy and knew he was acting very inappropriately. If she was lucky, he’d lose his job and be sent home before the Trident pulled out of dock.

“You’re the one,” he whispered against her neck, sending another delicious tremor through her.

Gathering her wits despite the flood of hormones surging through her body, she launched herself out of his arms and landed against the wall. After turning around, she leaned against it for support and read his name tag.

“Your behavior is way out of line, Officer Whitney. I’m going to report you.”

“Oh, I don’t think you will.” He thrust his hands into his pockets, his dark eyes flickering with amusement. “You enjoyed it too much.”

“I’m not even going to dignify that with a response.”

But she didn’t have to. Glancing down, she realized her nipples spoke for her by protruding against her beige blouse. So much for dignity and her thin, useless bra. Straightening her spine, she crossed to the door. Her cunt was so wet it probably needed its own fleet of lifeboats. Before she could turn the handle, his hand closed over hers.

“You’re much too uptight, Rhonda.”

“That’s Ms. Simms to you, Officer Whitney.” She drawled his title as if to tell him how little she thought of it. “I’m warning you. Keep your distance if you don’t want to lose your job.”

“Ms. Simms, what you need is a good fucking.”

Available at Amazon and other online book retailers. 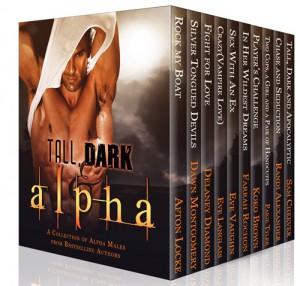 He makes your heart pound and melts your resistance away. He promises you a world of passion and you find it impossible to resist his dark charm. When he catches your eye across the room, you know he means business. He could be an executive, cop, shape shifter, or a bad boy looking for a little fun. Once he has you in his sights, you can’t get away—and after one sizzling night in his arms, you won’t want to. He’s Tall, Dark & Alpha. The alpha male is the ultimate indulgence…the richest dark chocolate…and we’re offering him to you in abundance.

Do you love HAWT military men?

RETROGRADE wins award! Check it out! Read Chapter One