A hot new series you won’t want to miss

Emily will be awarding a $25 Amazon GC to one randomly drawn commenter.

Welcome to desireesplace.net. A few questions so that audience can get to know you.

YES!!!! Any excuse to break out my moves. Many of my dinner parties devolve into dance parties. You know it’s going to be a good night when half the party is on the counter tops, grooven, before desert is even served… not such a good morning though.

Can you describe your dream home?

It’s modern, with lots of glass, there is a pool out front, and it’s on Santa Theresa beach in Costa Rica.

If you could be any character, from any literary work, who would you choose to be? Why?

Elizabeth Bennet from “Pride and Prejudice” because she’s smart, fun, and gets to marry Mr. Darcy.

What is the first curse word that comes to mind?  How often and why do you use it?

Fuck. I use it for fucking everything all the fucking time.

How would you spend ten thousand bucks?

I’d give some to NPR, Planned Parenthood, and the HRC then I’d stash the rest in my checking account to be slowly consumed by my life.

And now, her new release:

The Sydney Rye series of mysteries features a strong female protagonist and her rescue dog, Blue. This series is recommended for the 18+ who enjoy some violence, don’t mind dirty language, and are up for a dash of sex. Not to mention an awesome, rollicking good mystery!

This box set includes all three of the Sydney Rye Books.

When the series begins Sydney Rye is named Joy Humbolt. She does not like people telling her what to do, so it comes as no surprise that she was just fired from her last job. When she buys Charlene Miller’s dog-walking business on Manhattan’s exclusive upper east side, it seems like the perfect fit: Quiet environment, minimal contact with people.

But then one of her clients turns up dead, and Charlene disappears. Rumors say Charlene was having an affair with the victim–and of course, everyone assumes Joy must know where she is. Joy begins to look into the crime, first out of curiosity then out of anger when there is another murder and threats start to come her way.

When police detective Mulberry is assigned to the case, Joy finds a kindred spirit–cynical and none-too-fond of the human race. As they dig deep into the secrets of Manhattan’s elite, they not only get closer to the killer but also to a point of no return. One last murder sends Joy Humbolt hurtling over the edge. Her only chance of survival is to become Sydney Rye.

DEATH IN THE DARK (A Sydney Rye Novella, #2)

At the beginning of Death in the Dark we find Joy Humbolt hiding, not only from the law, but also from her past and the mistakes she’s made. Living this isolated life doesn’t last long though when a visit from Mulberry brings Joy to accept her new identity as the Private Detective, Sydney Rye. To complete the transformation, Joy must learn to control her emotions as well as her giant aggressive dog, Blue. With the help of an expert trainer, Joy learns to fight with her mind as well as her body. However, when the daughter of a close friend is brutally murdered in the desert, Rye turns away from her mentor to seek revenge. Sydney’s quick temper and deadly intentions lead her into a trap that she will need all of her new skills to survive. 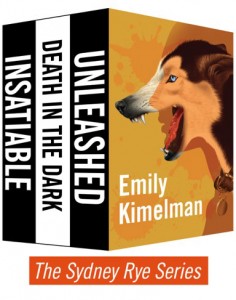 The third book in the series begins with private detective Sydney Rye living a simple, disciplined life in London, but when a dangerous man from her past calls, Rye finds she cannot turn him away. Robert Maxim explains that the daughter of a powerful friend has gone missing and he wants Rye to find her. In exchange he offers her something she had given up hope of ever having; freedom from her past.

With her dog, Blue, at her side, Rye meets up with her new partner, a handsome man she’s not sure she can trust. Heading for Mexico City, they go undercover, posing as husband and wife. After meeting with the bereaved parents, Rye starts to sense that there is more going on than just a missing girl. But it isn’t until they arrive in the Yucatan Peninsula, hot on the girl’s trail in Paradise, that all hell breaks loose. Sydney has to reach out for help from old friends and deal with the consequences of her past, if she’s going to find the girl and keep them all alive.

STRINGS OF GLASS is the fourth novel in Emily Kimelman’s Sydney Rye Series of dark murder mystery novels. This series features a strong female protagonist and her rescue dog, Blue. It is recommended for the 18+ who enjoy some violence, don’t mind dirty language, and are up for a dash of sex. Not to mention an awesome, rollicking good mystery!

Sydney Rye is hanging out in India with her boyfriend, Dan, reading paperbacks and sipping beer. No violence and no reminders of her past. But when she and Blue, are attacked by a pact of wild dogs, Sydney starts to feel that old itch again; to do good by being bad.

Trouble finds Rye when she stops the attempted rape and murder of Anita, a reporter working on a story of corruption and human trafficking. The atrocities Anita describes send Sydney, Blue and Dan on a quest that takes them across India after a dangerous and, up until now, untouchable, figure. While Sydney struggles to accept her true nature she realizes that it is the only way to end decades of abuse and exploitation. But Rye fears that she will lose herself, becoming no better than the monster she fights against.

I woke up with my hands over my head, the joints at my shoulder aching. It was hot in the small space and I tried to scratch an itch on my nose but couldn’t move my arm. I blinked my eyes open.

There was a man sitting on the end of my bed. Instantly I was awake and nauseous with fear. I yanked at my arms but instead of moving them down to me, I moved myself up to them. Sitting on the bed, my feet underneath me I could see that my hands were tied and stuck to the headboard with what looked like a giant nail. My ankles were bound with a thick rope that itched once I saw its rough fibers rubbing my skin red.

The man was small in stature, thin, with black hair that curled in tight ringlets almost to his waist. His skin was tan and his eyes deep brown. His eye lashes curled up, long and thick, like a cows. He watched me without comment.

He smiled, a wide grin that showed off big teeth with even, thick spaces between them. “I’m Merl.”

“What are you doing in my bed?”

He reached out a hand and that’s when I saw the dogs. There were three Doberman pinchers patiently panting. Two on his left and one on his right. Blue sat next to the last, his pant in sync with theirs. Merl reached into his belt and pulled out a knife.

I breathed deeply, trying to slow my heart which was in the process of filling me with so much adrenaline that my teeth began to chatter uncontrollably. I clenched my jaw to shut them up and felt my stomach threatening to empty.

“Cat got your tongue?” Merl asked and then laughed, showing off his wide-set teeth again. The knife glinted in his hand. Merl reached toward me with the knife. When his head was close enough, I reared back mine and tried to slam it into his skull. But Merl was much too quick for me and I threw myself through the air, flipping off the bed.

Getting my bound feet underneath me I faced him, my teeth grinding and my heart about to explode.

Emily Kimelman lives on a boat in the Hudson Valley with her husband, Sean and their dog Kinsey (named after Sue Grafton’s Kinsey Millhone). Kimelman has a passion for traveling and spends as much time as possible in the pursuit of adventure.

Her “Sydney Rye Series” are dark murder mystery novels which features a strong female protagonist and her rescue dog, Blue. This series is recommended for the 18+ who enjoy some violence, don’t mind dirty language, and are up for a dash of sex. Not to mention an awesome, rollicking good mystery!

The first four books in Kimelman’s series, UNLEASHED, DEATH IN THE DARK, INSATIABLE and STRINGS OF GLASS are available on Amazon, Barnes & Noble, iTunes, and Kobo.

If you’ve read Emily’s work, and enjoyed it, please let Emily know. You can reach her via email ejkimelman@gmail.com

Buy links for all books at Amazon:

Can former SEAL Charlie Zero save her life?