Desiree's Place > General > A kiss is more than just a kiss 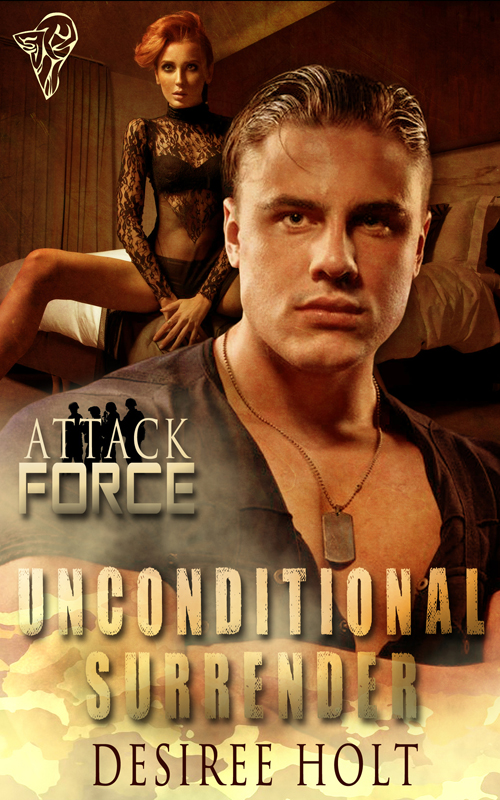 Be sure to leave a comment. One lucky person will win a $10 GC from Amazon or Barnes & Noble.

And if you click on this link http://blissekiss.co.uk/100th you can find all the other hot blogs participating with great prizes.

Unconditional Surrender is well written, has compelling characters and is very sexy. It’s a good length to lose yourself in and I for one would be happy to see what stories the other members of this Delta Force team have to tell.

Slade Donavan is the leader of a Delta Force team. But he’s so much more than just an alpha male on the battlefield, he also likes to dominate in the bedroom, a role he prides himself in. But what happens when he wants more than just a woman to play with, what happens when he needs someone to share his life with? Kari, an assistant district attorney, works hard and plays hard too. But since a meeting with a Dom, when she was a young, naïve sub, five years ago, she’s been searching for that very Dom but without success.

He tilted her head up with two fingers beneath her chin so she was looking directly into his eyes.

“My name is Slade Donovan.”

Her eyes widened and she slid her tongue over her lower lip.

That little action actually made him semi-hard.

“It’s customary when someone tells you their name to tell them yours.” His voice was tinged with an edge of humour.

Another swipe of the tongue. “Kari. Kari Malone.” She frowned up at him. “Why…?”

“Why do I want us to exchange names? Not maintain the anonymity?”

“Because I think I want more than sex with you, Kari Malone. I want to get to know you.”

And he really did. He wanted the permanence he needed, and he wanted it with someone who was more than just a partner for sex. He kept feeling he’d found it with Kari Malone.

An expression of surprise washed over her face. “You do?”

“Yes.” Had he misread her completely? Was she only interested in what they had here? He’d been so certain, especially when she’d shown up here tonight and hadn’t hooked up with anyone.

Then she smiled. “Me too.” She reached up and touched his cheek, a soft caress.

He cleared his throat. Here came the hard part. “I have a job that takes me away for long periods of time. The next time I’ll be in town won’t be for a couple of months. Will that work for you?”

He curbed his impatience as he waited for her answer, relaxing when she nodded.

“Yes. That’s fine. My own job keeps me pretty busy, too.”

“How about a cell number so I can call you? I’d like to take you to dinner. Spend some time talking to you so we can get to know each other. And I don’t think we need to go through Bruno for that. Right?”

Slade wondered if there was any other place where two people would have this conversation standing completely naked and not think it strange.

They dressed silently but just before he opened the door to the corridor he turned to face her, cupped her face with his palms and pressed his mouth to hers. He licked the seam of her lips and she opened for him. His tongue swept inside, tasting every inch of her. His senses reeled at the exotic flavour and his hands tightened on her face. They were both breathing heavily when he finally broke the kiss.

She looked at him, stunned. He was a little shocked himself. Very little kissing went on during D/s play at The Edge. Kissing was so personal, so intimate—a connection to the emotions as well as a physical response. And he was sure she hadn’t been prepared for the explosion of feelings the kiss had ignited any more than he had. But it just reinforced his belief that he had made the right decision. That there was really something here. For both of them.

“Just something to hold you until I get back.” He grinned.

“I’m pretty sure it will.” She started through the open door then turned back to him. “And Slade?”

“I won’t be coming to The Edge until then, either. Just so you know.”

The image of her holding herself out just for him made his balls tighten and his cock swell. The next two months were going to be very, very long.