Cerise Deland has done it again! 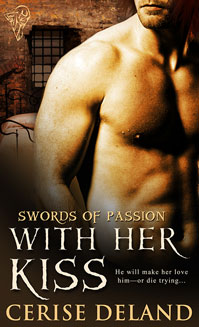 WITH HER KISS, A novel of love restored, revenge complete, a king laid low.

She screamed, the torment of being jostled gnawing at her bones and sending raw pain of a thousand needles through her flesh. What hell was this?

She saw stars, a velvet sky. Moonlight seared her eyes and she clamped them shut. Too long in the dark. Too long without hope of light. What use to take her away if she could not see? Or could not talk? Or, worse, had lost her mind?

Some strange ties bound her arms. She struggled and stilled, knowing the fight useless.

Dreaming. I fantasise. I wish for release and find it only in my mind! 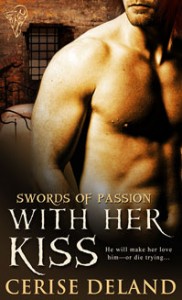 Did men whisper? Aye, she heard footsteps. Boots, men’s boots tromped across sodden grass, the sucking noises reminiscent of her watery cell. The clank of swords, the stomping of horses’ hooves in that same wet earth that met her ears. Someone manhandled her.

Christ, let me go! She tried to beat upon the broad chest that bound her tightly to a wall of warm flesh. But she could not lift her hand and her head lolled back.

No, no! She worked at words and found no sound possible.

“She drifts in and out of her mind,” said another.

Was that the same man who had spoken Latin? The same one who had urged her to speak?

“Here, hold her while I mount.”

No. That is another man, his voice so familiar and so dear. So hated. Geoffrey?

Bounced from one tight embrace to another, she gritted her teeth to quell the pain. Let me die, she urged whoever was her newest captor. Her limbs afire, her heart racing, she panted for breath. No more, she begged.

But whoever he was, he did not listen. Instead, she felt herself passed from one set of bonds up into the grasping arms of another. The first man who had held her, found her and spoken to her in the dungeon held her again. Geoffrey? No. This cannot be he.

She dared to lift her eyelids a fraction.

Dark hair, shining oddly auburn in the moonlight. Hair, curling at his ears. The eyes, the same soft solace as Geoffrey’s. His face, lined with years and worries.

Her heart pounded with the similarities. Hope, so brittle, broke inside her, a hundred fragments, sharp and small.

No, this is not he. Impossible for this man to be Geoffrey. He is an angel of death, please be to God, come to claim me.

“To ride will hurt like the hounds of hell, ma cherie,” he told her, his lips to her ear, his arms like iron straps around her shoulders and her knees. “A litter would slow us. We have no alternative.”

She felt a jolt of his massive body. Envisioning a man who rode his horse like wind upon water, she gazed at a man with tousled hair and a strong jaw. She felt the jolt as he dug his spurs into the flanks of his stallion. And off she rode with him, clasped to him as if forged. A thrust, a bolt, a gallop tore at her insides, yet she was clutched to him by his rope-like arms while the ground thundered beneath his animal’s hooves.

The breeze was raw, crisp in her hair and against her skin. She shivered, yet inhaled the fresh air of night. The stars danced above her. The moon darted between menacing clouds. The night stretched out around them, for indeed there were more to this party than simply she and her abductor. The others were no fantasy. She heard their mounts. The hooves as they struck the ground, churning, clinking on stones. She heard the men. Their grunts as they dodged tree limbs and shouted to their companions of dangers ahead. She felt the care of the man who held her and above that pain that seared her mind, she remembered one man who had held her so tightly, so dearly, so briefly. Strange. He had felt the same as this man. And smelled the same as this man.

But he had not cared for her as well as this man. 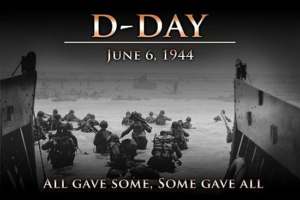