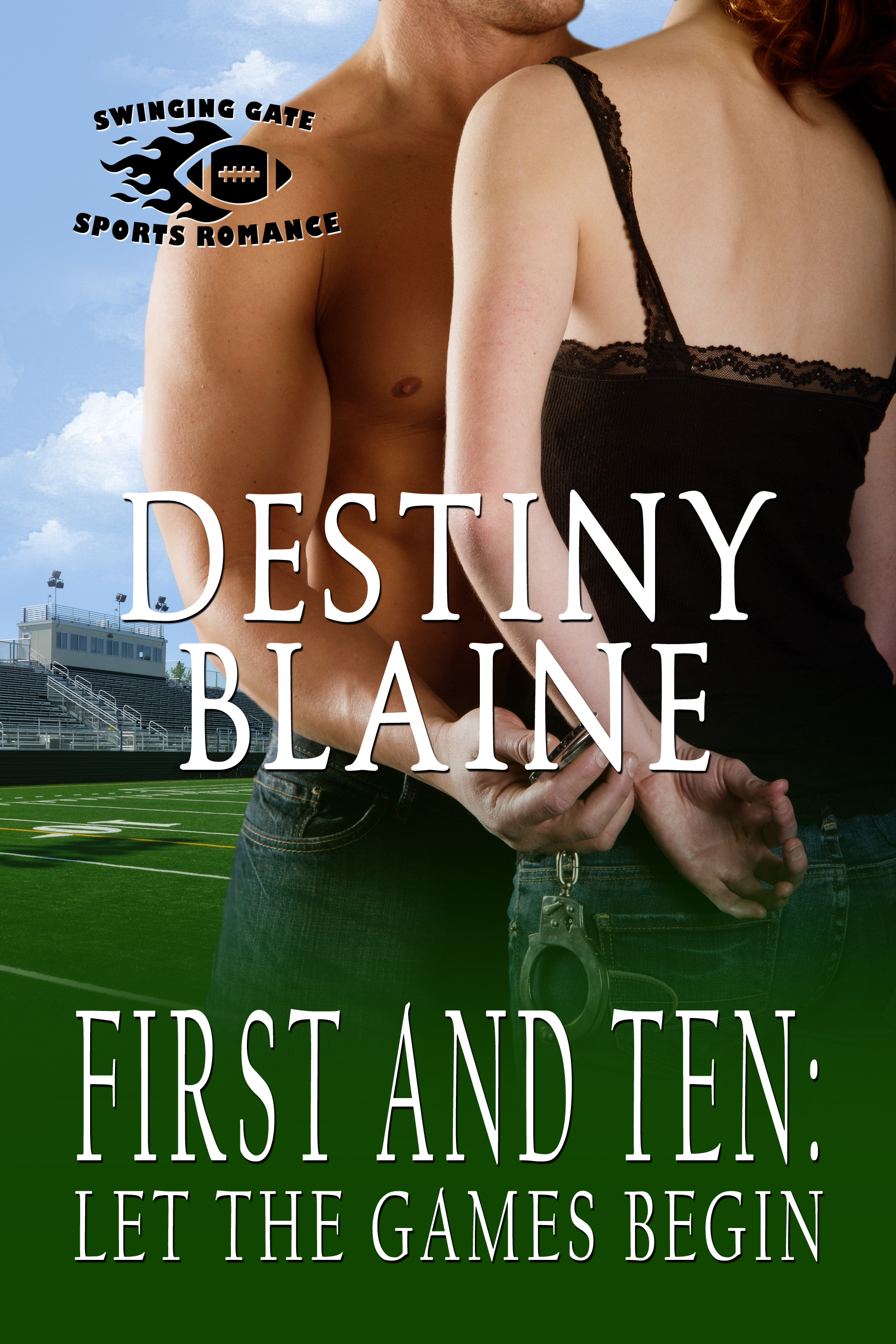 Coming to Champagne Book Group and Carnal Passions on September 2, 2013

Tagline/Logline:   In love and romance, true winners are only determined by how long their hearts stay invested in the game.

Football superstar Kemper Kapertone is caught in a compromising position. Thrust into a media frenzy, Kemper flies across the country hoping to save a relationship now shattered beyond repair.  Tired of waiting on the sidelines, Kara Ball decides the role of jilted lover doesn’t work for her. Kara springs into action and pursues her sexy neighbor, an irresistible Dom who is twenty-seven years her senior and the object of her most recent fantasies.  Zak Stone stops by Kara’s condominium to drop off a parcel, but after the sexy seductress learns of her boyfriend’s engagement, plans change.  Soon, Kara opens up a package filled with illicit toys and the naughty ideas start churning.  While Kemper races against time to set things right, Kara invites Zak to stay overnight, hoping an evening of passion will keep him coming back for more. Fortunately for Kara, Zak is only interested in playing for keeps.

“Are you in the business of fooling around with younger women?” she asked, working a strut like he’d never seen from her before. Leaning over to pick up the handcuffs she’d deliberately—and obviously—dropped, she wiggled her behind.

He swore under his breath, wishing he could set aside his morals for one night and take her in his arms and hold her there until he taught her a few things about Domination and submission. He’d show her why a Dominant man needed a submissive woman. He’d teach her how to willingly submit and make her understand that through her submission, she would know empowerment. She would experience a new level of intimacy.

“I’ve only been with Kemper,” she told him, acting as if her revelation was the best news he’d received in over a decade.

In fact, he would’ve preferred it then if she’d confessed to promiscuous behavior.

“You’re hurting,” he reminded her, reading entirely too much into her confession. “I’m here and you have a wounded heart, a torn soul. I can’t heal you, Kara.”

How did he tell her he didn’t want to heal her? How did he explain that while he wanted to kiss it and make it better, curing her wasn’t on his mind. He wanted to claim her. And if claimed her, he fully intended to keep her.

How did a man tell a woman that?

She took a step toward him. He took one step back.  She shot him this funny little look, crossed her arms, and for a minute, he could’ve sworn she was about to strip her shirt over her head.

He willed her to stop even though his body had already reached a decision, drawn all conclusions.

One touch and she was his. One gesture to indicate she fully intended to invite him to stay and he would give in to the long awaited temptation, the attraction he could not deny.

She moved toward him again, taking three short calculated steps as if she had deliberately analyzed the best way to separate their distance just as she’d done earlier when they’d been downstairs on her sofa.

A door slammed and her eyes popped open. “Oh my God.”

Zak quickly pulled out, resting his forehead on her back as if he needed a moment to gain his bearings. “What the hell is he doing here?” His voice was dangerously low.

Kara shuddered. Her ragged breath came out in spurts.

How much had they heard? Worse still, how long had they stood there and watched her in the throes of pleasure, in the clutches of passion?

Carly turned away. Kemper looked at her dead on.

Zak scurried to his feet. “Don’t you believe in knocking?”

“Kara?” The color washed out of Carly’s face when she turned to the room once more. “What were you thinking?”

A hoarse cry fell from Kara’s chest. “What the hell are you two doing here?”

“I should ask you the same thing,” Kemper said.

“As if you have a right!” Kara’s blazing fury shook through her body. To make matters worse she was still tied and bound, slumped in a doggie-style position on the contraption Kemper had sent her as a gift.

All things considered, it probably wasn’t the best time to let him know how much she appreciated his thoughtfulness, even though she was tempted.

Zak stood in front of her with his hands blocking his cock. “Can you give us a minute?”

“What the hell are you doing to my girlfriend?” Kemper stalked him then.

Kara tried to wiggle one way or another in an effort to free herself. “Why aren’t you on your honeymoon?”

“Psht!” Carly exclaimed, though she didn’t bother with a true reply.

Kemper clenched his fists and glared at Zak. “If I were you, buddy, I’d get lost.”

Kara grabbed an opportunity to glare at her best friend. “Just who are you to tell us what to do?”

“The friend who loves you,” Carly assured her. “I’m concerned about you, Kara. Clearly, you aren’t thinking straight.”

“I’ve never been so sure and confident in my life,” she snapped, turning her attention to Zak. “Don’t go, Sir.”

“What?” Carly and Kemper chimed in together.

“I’m not going anywhere, baby,” Zak said, grabbing his towel and wrapping it around his waist before pulling a sheet off the bed and covering Kara’s body. Dipping his hands under the coverlet, he blindly fumbled with the shackles in an effort to free her. “The two of you should wait downstairs. We weren’t expecting company at four-thirty in the morning.”

“We?” Kemper pushed by Zak and glared at Kara. “And what is this Sir shit?”

Kara glared at Carly and thinned her lips, silently pleading with her friend to take Kemper and go. Instead of aiding her, Carly asked, “What in the hell is that doohickey you’re wearing?”

Kemper bit out, “I sent her all these things so she would get used to the idea of Domination and submission!”

Carly scowled. “You?” She shoved her balled fists against her waist. “You didn’t get very much bang for your buck now did ya?” She glanced around the room. “How’d all this work out for you, babe? Hmm?”

Kemper’s face turned blood red. “I think she’s got the hang of it.”

“Considering I don’t receive gifts like these and I’m the one who loves the lifestyle, maybe you should ask yourself if you gave the right presents to the right woman. If I’d been in a contraption like that, you can bet your sweet ass you would’ve been the one coming in from behind!” Carly threw up her arms and stormed out of the room.

Kemper ignored Carly and stood over Kara, acting as if he were taking in the whole scene. “Have you been seeing one another long?”

“No.” Zak supplied the answer.

“I didn’t ask you!” Kemper never looked away from Kara.

“Obviously not,” Kara bit out. “The package just arrived today.”

“Be a gentleman and wait downstairs for us,” Zak said.

“I am not talking to you!” Kemper yelled, his muscles bulging around his short sleeves. He acted as if he were seconds away from taking that first swing.

Kemper had always been slow to anger, but when that ugly beast rose to the fore, he went berserk. She didn’t want to witness a fight. She just wanted Kemper and Carly to go.

“Why would you do this?” Kemper dragged his hand from forehead to chin. The slow act brought on a noticeable transformation. A furious expression replaced the face of betrayal and confusion.

Zak placed his hand on his shoulder. “You heard the lady. She wants you to wait—”

“Get your hands off me!” Kemper screamed, shrugging away from him. “You don’t want to go up against me, buddy!”

“She wants you to wait downstairs and you can do that now or I can call the police. Take your pick.”

Kemper laughed and another demeanor emerged, one Kara hadn’t seen in the past. He glared at her like he saw straight through her. “He doesn’t know. Does he?”

“Know what exactly?” Zak knelt next to her again and finished unbuckling the restraints. He helped her to her feet. “What don’t I know?”

Kara met Zak’s curious gaze, but she couldn’t speak. She knew what Kemper wanted her to tell him, but she couldn’t bring herself to say the words. If she voiced them then, she would feel like such a kept woman.

She studied Kemper and gauged his behavior. That was precisely what he wanted her to feel like in that very moment—a kept woman, somebody’s whore, and his little puppet.

Slow to regain her balance, she grabbed the bedpost and held the white linen sheet to her chest. Her bottom was sore with the recent reminder of what she’d done and with whom.

Both men stood side by side. She couldn’t hide from either of them. She couldn’t run, because where would she go? Carly returned to the room with her arms crossed. She was equally pissed, but Kara couldn’t figure out why.

At the moment, Kara didn’t care. Carly had known she was infatuated with her neighbor. Hadn’t she suspected something like this would eventually happen?

“She won’t tell you, so I will,” Kemper said, stomping across the room to the walk-in closet. Swinging the door wide, he shook his finger inside. “Those clothes are my clothes. This is my bedroom. This is my condo.” He swung around and waved his finger in Kara’s direction. “And that woman—regardless of what happened here—is my fucking woman!”

International bestselling e-book and trade paperback author Destiny Blaine writes in all genres using several pseudonyms. Destiny lives in East Tennessee with her husband and four pampered dogs. Her daughter is in college and her son is serving in the United States Navy. For more information, visit her website at www.destinyblaine.com and follow her on Twitter at www.Twitter.com/DestinyBlaine or Facebook. To access her street team information, visit The Wild Pack.