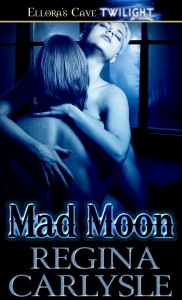 High Plains Shifters, Book 6
Madden Moon knows what she is the second she walks into the old café. Shifter. Wolf. Trouble. Struck by her beauty and the air of exhaustion about her, the leader of the Texas Rogues wishes her straight out of town, but as the mating energy of their species sizzles between them and her enemies approach, he has no alternative but to bring the beautiful lycan under his protection and into his bed.
Runaway Lana Vronski is in big trouble. As she races through the woods, local wolves in hot pursuit, she believes all is lost until she is rescued by oh so sexy Madden. When he offers her sanctuary and sex hot enough to burn them both, she accepts his proposal. But it isn’t until the mating heat between them begins to sizzle wildly out of control that Lana learns her true salvation awaits in his arms. Lana’s enemies are relentless, however, and will stop at nothing as they attempt to rip her from the arms of the man she loves.
A Romantica® paranornal erotic romance from Ellora’s Cave

He scented her the moment she opened the door of the old café. He didn’t know who she was but what she was couldn’t have been more clear.

Madden Moon’s nostrils flared as the rich, spicy smell of the female curled through his brain, igniting base instincts that he promptly pushed aside to reexamine at another time. The she-wolf was an icy blonde, beautiful and wary. Though he’d never been a fan of short hair on a woman, the edgy pixie cut suited her delicate features. Her eyes, even from the distance, were a dark, exotically tilted midnight blue, thickly lashed and currently narrowed as she halted and stood skittishly in the doorway. The stranger shot him a quick glance and the single panicked look spoke volumes. She knew he was shifter too.

For a moment it seemed she’d bolt and head back out into the dark of night but that didn’t happen. His spectacular hearing registered the low growl of her belly. Then as her gaze shifted away, she squared her shoulders and hurried to a corner booth across the room from him.

As High Alpha of the Rogues, it was his responsibility to keep tabs on shifters who might pass through this area of East Texas. This poor, bedraggled little thing didn’t seem much of a threat to anyone. She looked stressed-out and exhausted. Still, he covertly watched her as she ordered something from the menu and gulped down a tall glass of ice water. By the time she’d finished that and started to drink her coffee, the waitress had set a plate containing two large burgers and a heaping mound of fries in front of her.
If he hadn’t known she was shifter by her scent, the woman’s enormous appetite would have given her away.

She glanced up at him and Mad had the good grace to look away. It was hard as hell to avoid staring at her, wondering about her and trying to figure out why she seemed so distressed. He might be a wolf but he was also a gentleman.

Most of the time.

Mad finished off the last of his coffee and leaned back against the faded faux leather of his favorite booth in Joe’s Hot Griddle. The remains of his fried ham, eggs and buttermilk pancakes littered the aged laminate table. The only twenty-four-hour breakfast joint in Sweetridge, Texas, wasn’t even close to being hot tonight. No more than two or three customers filled a room that could easily accommodate eighty. That was fine. It suited his mood. Mad wasn’t in the mood for company nor was he feeling particularly chatty.

Joe Grubbs, the shifter elder who owned the place, wearing a dingy white apron over the girth of his belly, ambled up with a pot of coffee. Without asking, he poured Mad another cup. He tilted his head toward the she-wolf who was busily devouring her meal. “Wonder who she is.”

“No clue but I figure I’ll find out soon enough. Probably just passing through. If that’s the case, she can go in peace.” After grunting his thanks for the coffee, Mad motioned for the man to sit. “Why aren’t you out hunting with the others tonight, Joe?” Mad eyed the older man over the rim of his cup.

Joe shrugged. “Somebody’s gotta earn a buck or two around here. These days I’m feeling my age and those men get out of control with the bloodlust. Thirty years or so ago, I liked hanging with the rowdies, but now the thought of it just wears me out. I took a pass. But I could ask you the same. Figured you’d be out there ramrodding that mangy pack. Instead you’re here and looking morose as hell.”

“Just restless.” As High Alpha, it was his duty to tear up the woods and raise a little hell, all in the spirit of camaraderie and brotherhood, but he didn’t have the heart for it. He didn’t have to be psychic to know something was in the air.

Deep in his bones, he believed something was fixin’ to roll over him like high tide on the Gulf.

Off in the distance, he heard the howl of wolves. His men. His pack. They’d been hunting in the nearby woods for the better part of three hours now and, knowing some of them, their blood would be running high. It was a dangerous time for some of the younger wolves who were known to get into a shitload of trouble after a bloody hunt. When they were finished, they’d be looking for a balls-to-the-walls fight and a fast fuck, in no particular order. Gods help whoever got in their way.

Mad glanced at the woman. If she knew what was best for her, she’d get out of town while the getting was good. One or two of those young pups were downright dangerous and if they happened upon her after the hunt, she’d be in deep trouble. Exhaustion seemed to roll from her body, easy to pick up on, and he knew it would be hard for her to fight off trouble in her current physical state.

Finally he stood and tossed some cash on the littered table then glanced at the pretty lady shifter. He frowned and gave Joe a look. “With the hunt going down tonight, it might be a good idea to give the little blonde a heads up. She needs to hit the road.”

When Joe nodded, Mad shrugged, determined to put some distance between himself and the sexy stranger. “Best take off and see what’s what, Joe. You take care now.”
He felt the woman’s eyes on him as he made his way to the door and stopped to return her stare.

A sound similar to white noise buzzed in his ears and fairly rattled his brain then stopped almost as soon as it started. Chills raced over his arms.

There’s just something totally cool about writing/pubbing/and then publishing the sixth book of a favorite series and that’s what I did with Mad Moon (Ellora’s Cave). As West Texas girl, it simply made sense to create an entire small town and fill it with wolf-shifters who live and love by their own set of rules. With Mad Moon, I knew I wanted to expand the series into another small town, bring in favorite characters from the first books and then just keep adding more hunkalicious heroes and badass heroines. I’ve been asked many times when the series will come to an end but at the moment, I can’t imagine it since new folks creep into my brain and begin begging to just one more story. Hey…I can play along.

Thanks so much to my friend, Desiree, for inviting me to come play on her special day!

I will give away a copy of Mad Moon, book six of my High Plains Shifters Series to one commenter. Just comment and fill out the rafflecopter below.