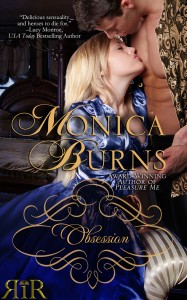 A woman on the edge of sin…

Helen Rivenall is willing to do anything to escape the brutality of her uncle’s home. But a promise of honest employment is a ruse. Drugged and auctioned off in a notorious London brothel, she finds herself won by a man who wants nothing from her except her participation in a harmless charade. Left with no choice, she reluctantly agrees, but as their web of lies grows, so does temptation and the realization that pleasure and sin are often one and the same.

A man about to lose all control…

Sebastian Rockwood, Earl of Melton is haunted by a dark secret in his past. One that taught him control is a personal trait to be valued above all others. He also learned never to give his heart to anyone. The risk is too great. Yet where Helen is concerned, his prized control is slowly giving way to temptation, and all too quickly he discovers nothing can protect him from the ultimate obsession—love.

Sebastian suppressed a groan as Helen’s sweet curves willingly burrowed into his chest. Had he lost his senses? This was insane. He’d never been so out of control in his entire life. Her soft body trembled against him. Was she afraid? He didn’t want her to be afraid of him. No. He wanted her to feel something else entirely.

He closed his eyes as he desperately tried to force his body to release her and put distance between them. His efforts failed the instant the scent of her filled his nostrils, enticing him to bend his head to take a deep breath of the soft lavender dusting her skin.

It was as if his body had taken on a life of its own as his mouth sought out the sweet curve of her lovely neck. She didn’t resist, but instead her head tipped to the side giving him a delicious expanse of creamy skin to nibble on. The pounding beat of her heart whispered against his lips. Sweet and hot against his lips, the silkiness of her skin ignited a craving deep inside him as he kept her locked against him. It was a need that threatened to undo him.

Unable to think straight, he slid his mouth across the edge of her jaw, absorbing her small tremors into his muscles. He should release her. But he couldn’t. Something compelled him to hold her close. Then he heard it. The husky sound of his name falling off her lips.

The poignant capitulation in her voice made him stiffen in horror. Helen was a guest in his home. He was supposed to be her protector from everyone, including himself. He’d lost control again, and in the worst manner possible.

If you love a tortured hero as much as I do, then I think Sebastian might just be one of those alpha males who have to control everything in their lives simply to avoid their lives dissolving into chaos. I wrote Sebastian’s and Helen’s story almost ten years ago, and I love them as much now as I did then.

One eCopy of Obsession via a Smashwords coupon. Just comment and fill out the rafflcopter below to enter.

Shira Anthony takes us on a journey