Wanna know how to leave Texas?

A huge welcome to Alana Cash today and How You Leave Texas. Although I am a Texas gal through and through so I don’t think I’ll ever be leaving!

Check this out: How You Leave Texas placed first place in the Short Story category of the GLOBAL BOOK CONTEST 2013.

Be sure to follow the tour and comment; the more you comment, the better your chances of winning. The tour dates can be found here: http://goddessfishpromotions.blogspot.com/2013/05/virtual-book-tour-how-you-leave-texas.html

How You Leave Texas is a volume of three short stories and a novella about four young women who leave Midland, Austin, Fort Worth and Mayville, Texas for New York, California, Jakarta, and in one instance, jail.  They seek escape from boredom and sorrow and find it.  The stories are hilarious, tragic, revelatory. 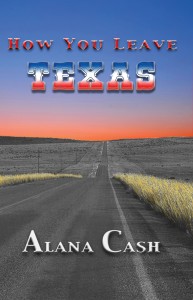 From the short story Camille’s Net Worth

She was late to work at Fastbinder’s Mortgage Company, and when she arrived, the atmosphere in the office felt charged. Something was up. The top managers were in an unscheduled conference call and no one knew why. No one was working, so Camille called her mother to thank her for the flowers that were already sitting on her desk.

“What do you and Walker have planned for tonight?” Elaine Morgan asked her daughter.

Camille explained about the dinner.

“What is he getting you as a gift?”

“Well, have a wonderful time, honey,” her mom said.

It was ten o’clock when Camille got off the phone. The accounting department surprised her with a birthday cake, sang to her, and gave her the card they had all signed. Five minutes later, the managers were out of their meeting and everyone got canned by one loud announcement from the District Manager.

“We’re sorry to have to tell you that you are all let go.”  That is all that Camille would ever clearly remember.

The mortgage company was belly-up. Those few employees who were retained were being transferred to the Las Vegas branch. Everyone was in shock and had no time to express outrage or disappointment because they were told to pack up all of their personal belongings and exit the building immediately. Camille took the elevator down the four floors, amid grumblings from secretaries and mortgage brokers. What about our benefits?  I didn’t take all my vacation this year. Someone ought to blow up the building. I stole a printer.

Alana Cash is an adventurer.  She’s trekked alone through war-torn Serbia and has slept in a KGB interrogation room in Prague.  She’s been to a gypsy fair in rural England, a bullfight in Laredo, and parasailing in Acapulco.  She’s been inside the New York Stock Exchange and eaten in J. Pierpont Morgan’s home dining room.  She’s gone on a ride-along in a New York City patrol car and kissed a man inside the Norman Bates Psycho house at Universal Studios.  She’s been a lifeguard, legal secretary, accountant, writer, teacher, filmmaker and artist.

Her experiences are inspiration for her work as an acclaimed writer and filmmaker.

Sealed in Blood will get your blood racing.