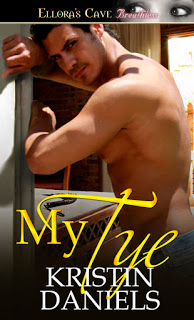 Thank you, Desiree, for letting me pop over and say HI to everyone!
For those who don’t know me, I’m Kristin Daniels—Erotic Romance author, self-proclaimed chocoholic and breast cancer warrior. I’m visiting today to talk about my new release with Ellora’s Cave, My Tye. It’s a sexy, suspenseful story with mild BDSM elements. The book, as a whole, means so much to me. It’s the story that bisects my life. I wrote the first part before my breast cancer diagnosis. The second part was written after, while I was going through treatments. Doing that wasn’t always easy, but at the same time, it was amazingly cathartic. I poured my dreams and wishes into this book—and yes, sometimes even my anger and fears.
My hero is Tye Carter. Mmm, mmm, mmm, what can I say about Tye? He’s a sheriff—and he’s a Dom—but he’s also one of the most compassionate characters I’ve ever written. His sole focus is to give our heroine, Laine, everything she needs—all while keeping her safe at the same time. He knows just how far to go with her, exactly how far to push her. To me, there’s nothing sexier than a man who intrinsically knows who his woman is, one who will stop at nothing to make her dreams come true. Laine blossoms with him, and I’m not going to lie, I get way melty inside when I go back and read the steamy parts of this book. Yumm-o.
Here’s a snippet of what I’m talking about. Hold on to your drawers—you’re about to fall in love!
Blurb:
For years, Laine Morgan has fantasized about being bound and taken. After a night of testing the waters at a BDSM club, all her erotic dreams shatter when she’s assaulted and kidnapped. Tossed into a hell she never expected, she’s forced to succumb to the protection of Sheriff Tye Carter—the star of her most vivid bondage fantasies.
Tye’s hidden his desires from Laine for over a year, but not anymore. She’s hurt and scared, which throws the Dom inside him into a rage. He’ll do anything to protect her, even move her to his ranch. But having her all to himself sends his control into a tailspin. And when Laine finally reveals her sexy secrets? He knows he’s the only man who can give her everything she needs.
But there’s an enemy on the loose, one whose personal brand of hatred has put Laine’s life on the line. In the span of a heartbeat, Tye’s is too. To save them both, he’ll have to surrender control to the one woman who might not be ready to accept it.
Excerpt: 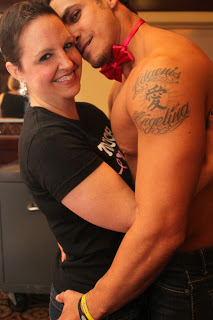 Kristin’s bio: Kristin Daniels has always been a reader of romance, but it wasn’t until she discovered the erotic romance genre that she finally figured out what had been missing from all the books she’d read before. The heat, the passion…that was it! Her love of reading (any genre, any format…really just anything) led to her taking a chance on writing something of her own, and she’s been hooked ever since.
Kristin calls the suburbs of Chicago home, where she lives with a hero of her very own and their three great kids.
Website: www.kristindaniels.com
My Tye buy link: http://www.ellorascave.com/my-tye.html