Important: p.m. will be awarding a Celtic Know Necklace to a randomly drawn commenter during tnhe tour.Increase your chances by visiting all the tour stops.
The tour dates can be found here: http://goddessfishpromotions.blogspot.com/2012/12/virtual-book-tour-dylans-song-by-pm.html
Suspense Magazine says, “p.m.terrell’s writing is powerfully written and masterfully suspenseful; you have to hang on for the ride of your life.” Midwest Book Review says the Black Swamp Mysteries series is “page-turning action, unforgettable characters, breathtaking descriptions and unexpected plot twists.” And syndicated reviewer Marcia Freespirit says the series is “riveting, spell-binding, sexy and intense!”
Who is p.m.terrell?
p.m.terrell is the award-winning, internationally acclaimed author of more than 16 books. Vicki’s Key, one of the first books in the Black Swamp Mysteries series, was one of five finalists in the 2012 International Book Awards (Mystery/Suspense) and 2012 USA Best Book Awards (Mystery/Suspense.) River Passage, an historical work based on her ancestor’s migration to Fort Nashborough in 1779-1780, won the 2010 Best Fiction & Drama Award. The Nashville (TN) Metropolitan Government Archives determined it to be so historically accurate that they entered the original manuscript into their Archives for future researchers and historians.
Prior to becoming a full-time author in 2002, terrell founded and operated two computer companies in the Washington, DC area. Her clients included the United States Secret Service, CIA, Department of Defense and federal and local law enforcement. Her specialty is in the areas of computer crime and computer intelligence. Her experience in these areas have greatly influenced her books’ plots.
She is the co-founder of The Book ‘Em Foundation, whose slogan is “Buy a Book and Stop a Crook” and whose mission is to raise awareness of the link between high crime rates and high illiteracy rates. She founded Book ‘Em North Carolina Writers Conference and Book Fair, an annual event to raise money to increase literacy and reduce crime.
For more information on Book ‘Em North Carolina, visit www.bookemnc.org and www.bookemnc.blogspot.com.
p.m.terrell’s website is www.pmterrell.comand her blog is www.pmterrell.blogspot.com.
She can be found on Twitter @pmterrell
On Facebook at https://www.facebook.com/author.p.m.terrell and https://www.facebook.com/pages/pmterrell/129318810431554.
I know everyone asks this but why did you decide to write romance?

I had written a number of suspense/thrillers that took the reader “up to the door” but left most of the romance up to their own imagination. When I was writing Exit 22, the first in the Black Swamp Mysteries series, I took the romance several steps further—and my fans loved it.

But when I wrote a love scene in Vicki’s Key, my editors urged me to take it much further than I ever had before. I wanted it to be tasteful and classy and a love scene in lieu of sex for sex’s sake. I don’t know whether it was due to the writing or the fact that the hero is an Irishman, but fans fell so hard for Dylan Maguire that I knew the romance had to continue.

When I wrote my first book, the hardest thing to do was stay self-motivated. When you don’t have editors breathing down your back or deadlines to meet, it’s entirely up to the writer whether they take one month or one decade to finish their book. It was difficult in those first years to fall into a routine in which the writing was a high priority.

The easiest thing to me now about writing is falling back into that familiar group of people, the setting and the trials and tribulations. I find inspiration everywhere I look. I never have writer’s block because I have so many ideas that the challenge becomes which one will be written next. 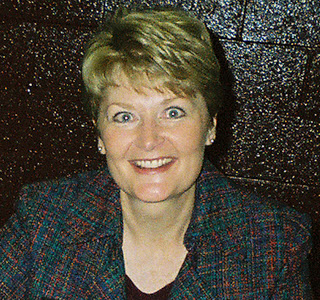 It took me about two years to complete my first suspense/thriller. I had founded two computer companies in the Washington, DC area. A trucking company asked me to write a program to hide their kickbacks, and I turned over evidence to the FBI. But the thought of a programmer being pulled into such a frightening situation stayed with me for many years. I finally wrote a fictionalized account of my ordeal in Kickback, about a programmer asked to hide trucking industry kickbacks. Her situation is much more dramatic than mine was—thank goodness!

It was a boilerplate contract with a small publishing company—one of those take-it-or-leave-it contracts. I’ve since gotten a fabulous literary agents who is much better at contracts than I am.

The Black Swamp Mysteries series takes place in the real town of Lumberton, North Carolina. The black waters of the Lumber River snake its way through the middle of town before leading into a natural area that can be almost inaccessible. I found the river, the swamplands and the sleepy historic area of Lumberton lend themselves very well to a suspense series. I will often have real events as a backdrop and I have used real people in supporting roles—with the individual’s permission.
What gets you in the mood to write?
I can’t wait until I’m in the mood to write anymore than a student gets into the mood to go to school. I go to my desk at the same time every day, six days a week, and do what I know I have to do. Sometimes the writing is great and sometimes not, but I keep plowing forward until I hit my stride.
What do you enjoy most about being an author?
I love creating fictional characters, interesting plots and breathtaking suspense.
Okay, quick fun questions:

Favorite music: Alex Band. His lyrics are poetry in motion.
Favorite movie: I have several. I love light romance such as Love Actually or Leap Year. I also love suspense with a twist such as The Others or The Gift.
Favorite time to write: any time is a great time.
If you could be stranded with a movie or television star who would you pick? Tom Selleck. Need I say more?
If someone played you in a movie who would it be and why? Susan Sarandon. She could capture all my complexities.
DYLAN’S SONG
By
p.m. terrell
Blurb:
Dylan Maguire returns to his native Ireland with psychic spy Vicki Boyd. Their mission: to locate and extract a CIA Agent who disappeared in Dublin while on the trail of a known terrorist. But when Dylan receives word that his grandmother is dying, he is plunged into a past he thought he’d left behind forever. His mission and the dark secrets he’d sought to keep hidden begin to merge into an underworld that could cost him his life. He must now confront his past demons and the real reason he left Ireland—while Vicki harbors a secret of her own. 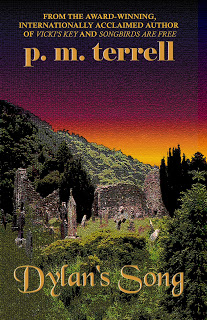 Excerpt:
Brenda motioned for her to stand to the side. Then she parted the curtains.
Dylan had come around the back of the house while three men tumbled out of the pickup. They immediately converged at the truck bed, where they picked up pipes and headed toward the front door.
“So, Eoghan,” Dylan called. His voice was loud and heavy as he moved further from the house, drawing the largest man’s attention to him. “What’re wantin’ with me now?”
“What have they got in their hands?” Vicki whispered hoarsely.
“Lead pipes.” Brenda’s voice was husky and strong.
“You know what we be wantin’,” the largest one shouted. “We’re here to finish your sorry arse off; what we should’a done a long time ago.”
The men began to separate. They looked like a pack of wolves, Vicki thought, as one moved to Dylan’s left while the other moved to his right. The ringleader, Eoghan, stood his ground directly in front of him.
“He doesn’t stand a chance with the three of them,” Vicki gasped. “Not spread out like they are, not even with the gun.”
“Killin’ me won’t bring ‘er back,” Dylan called. He continued backing away from the house.
“No, but it’ll put you in ’ail that much sooner,” one of the others shouted.
“Kill me and you’ll spend your life in a prison cell, Aidan,” Dylan said to him. “I’m not worth your freedom.”
“Why should we spend our lives in prison for killin’ a man?” the third shouted. “You didn’t spend a day in the clink for killin’ our sister!”
Vicki gasped. “My God!”
Brenda grabbed her shoulder, forcing her to look her in the face. She hadn’t realized that her sister had disappeared from the window. But now as she stared at her amber eyes burning hot, she began to take in the pistols in each hand. “Slip on a coat and your shoes,” she hissed. “Fast.”

Wanna know how to leave Texas?

Take an exciting ride on the Midnight Special