Leave a comment because one lucky person will win a $10 GC to Amazon or B&N.
Books 1-3 now in both digital and print
The Chupacabra has been a legend for decades, stretching from South America to North America, sighted in many place. Ranchers swore they’d killed it only to have it turn out to be a mutated goat or coyote. And the killing spree continued—animals and humans alike. Was it a wolf because of the way the bodies were mutilated? Or a vampire, because each body and three puncture wounds at the neck and was drained of blood? Each time someone was sure he had killed the beast it turned out to be a false alarm, because the killings continued. And the legend continued to grow.

When billionaire Craig Stafford’s wife and daughter were killed by the legendary bloodthirsty Chupacabra and none of the state or federal agencies could trace the half man/half animal, he funded his own team. He chose carefully from the best law enforcement agencies as well as the private sector across the country. Six of the eight selected are shifters themselves, each representing a wolf pack whose members had fallen prey to killers. Each one of them had also been affected by the beast and so had personal reasons to find and kill it.
Known simply as The Night Seekers (because they hunt most effectively at night), they work from an isolated ranch property in Texas, with all the latest high tech equipment and any other resources they might need. Their only mission: find and stop the Chupacabra, the bloodthirsty animal who not only kills but literally destroys his victims with his teeth and nails, and has given rise to so many legends. But first they have to discover how their target moves so easily around the entire country, and sift through the hundreds of files compiled on the many cases and sightings.
Driven by the thirst for revenge and the need to satisfy their lust, each member of the team will have his or her own story, one liberally packed with erotic sex, and in the course of the mission will find a relationship that brings stability to their lives. And with each relationship, the team continues to grow.
Lust Unleashed
Jonah Grey, driven by a lust for the blood of the legendary Chupacabra who murdered the woman he was to mate with, jumps at the offer to leave the FBI and join Night Seekers, who are dedicated to hunting and killing the devil beast. Jonah encounters a woman and there is such explosive chemistry between them that neither can turn away from it, and the sex that follows brings them to a level of pleasure neither has ever known before. He divides his time between tracking the Chupacabra and erotic bouts of orgasmic sex with Dakota. But he’s a wolf and the devil beast must still be dealt with. 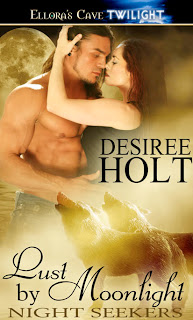 As a shifter Mark Guitron is uniquely equipped to search for the devil beast, El Chupacabra, and stop the horrible killings. Hunting one night by moonlight he spots another wolf whose aura tells him she is also a shifter. When he is visited by an erotic vision of her in human form he knows he must find her and make her his own.
Chloe Hansen is searching for her friend who she’s convinced is a victim of the devil beast. When she meets Mark she feels a primal tug that tells her they are meant to be together. As the join forces in the hunt, they soon learn that sex between them feeds a need, rather than slaking it. The multiple orgasms barely satisfy their lust for each other, and as they draw closer to their prey they mate in the fiercest coupling yet.
Lust Undone 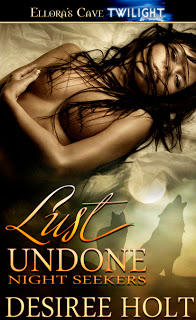 Returning to her home state of Maine to investigate  a possible Chupacabra killing, Sophia Black meets Clint Beltaire, lean, dark and sexy. From the moment she meets him the heat between them is incendiary, the sex erotic and the pleasure beyond her imagination. Clint takes her in ways that fulfill all of her fantasies and teaches her ways to please him. The Maine air might be cold but in Sophia’s motel room it’s beyond boiling. Clint works to help her with her case, using his knowledge of the area in which he grew up. And as they learn each others secrets it’s obvious to both of them that they are meant to be together. Mated.

Available at Ellora’s Cave and all virtual bookstores. And be sure to check out all the great reviews on Goodreads. 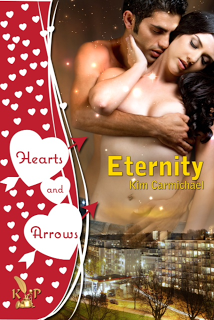