What’s Under My Hat today? Some very Dark Secrets 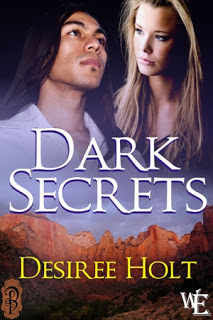 Everyone’s got dark secrets. Sheriff Hawk Blackwater, the new top law enforcement officer for the county where Freewill, Wyoming is located, has plenty—the lingering violence of a lifetime fighting ugly crime in Phoenix, dealing with his mixed raced heritage (his mother is Caucasian, his father Yavapai Indian), and a marriage that self-destructed. He has come to Freewill, Wyoming to begin a new life in the wide open spaces of the state, but some thing never quite go away. Riley Scott has dark secrets. She’s on the run, hiding away in tiny Freewill from a violence that could destroy not only her but many others. Then there is the unsolved murder of the former sheriff, the mysterious lights that come and go in the nearby Laramie Mountain, and a hostile environment in the sheriff’s office that has Hawk’s radar at full strength.
You’d think he’d have enough on his hands without being intrigued by Riley and her scared mouse aura. But when chemistry unexpectedly explodes between them and an attraction develops so strong neither can turn away from it, he adds ferreting out her dark secret to his to-do list. And as their relationships deepens, it becomes his number one priority.

Excerpt:
“Interesting, “ Hawk commented, watching the woman leave the restaurant. “Wonder what her secret is?”
Brady lifted an eyebrow. “Secret? How do you even know she’s got one?”
“Instinct. Half lawman, half Yavapai. All the signs are there. If I didn’t know better I’d think she might have something to do with John Foster’s death. Or even the lights in  the Laramies that come and go.”
“How do you know she’s not?” Brady asked.
“If she’d killed Foster or been a party to it, she’d be long gone, not hanging around here. Besides, she showed up months after the murder. But I wonder if she has something to do with these strange lights that are driving me crazy.”
Brady frowned. “What makes you think that?”
Hawk shrugged. “The lights didn’t show up until a couple of weeks after she got here. And she sure acts like she’s got something to hide. ”
“Maybe she’s running away from something,” Brady suggested. “Or someone. Don’t you think that’s more likely? She lands here in a place that’s not exactly a destination spot for people. Unless they’re going to the Misbegotten Gaines Ranch.  She doesn’t exactly reach out to people. Just keeps to herself. As far as I know the only places she goes besides work are the bookstore, Wyoming Eats and the grocery.”
“She’s not on any Wanted list. Could be she just likes her own company.”
“If you’re so curious you could always drop in at Books and More and the two of you could have a reading hour together.” Brady grinned. “You do read, don’t you, Hawk?”
Hawk made a face. “Very funny. But I might just drop by Darnell’s place. I’m out of feed for the horses and few other things.”
“You could always call in your order.” Brady laugh. “Save yourself a trip.”
Hawk just shook his head shoved his hands in his ranch jacket and walked towards the feed store.
Leave it alone. You have other things more important to focus on.
But he hadn’t been able to get her out of his mind. He didn’t know why she was bugging him. She certainly wasn’t any of his business, but his curiosity was on full alert. As was another part of his body.  Deliberately he tamped down the feelings surging through him. He had no business letting himself get involved with anyone. Especially someone who was obviously carrying a pound of trouble.
Go back to your office. Haven’t you got enough going on without piling on more?
But his feet kept moving in the direction of Freewill Feed and Supplies, trying to remind himself he had more important things than scoping out a woman doing her best to blend into the background. One of these days his curiosity was going to get him into real trouble.
Find it at www.decadentpublishing.com
Also at Amazon, Barnes & Noble and All Romance eBooks.

Women are fools for men who have tools